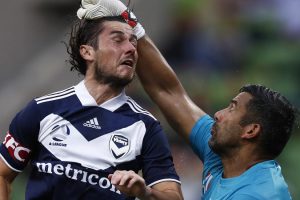 Melbourne Victory are sweating on the test results of star winger Marco Rojas as they wait to find out how much damage he has suffered from the hamstring injury, which forced him to leave the pitch in the second half of the club’s season opening loss to Brisbane Roar on Saturday night.

Rojas appeared to reach for his leg midway through the first half but after talking to coach Grant Brebner and assistant Steve Kean stayed in the game.

He looked lively in the opening period as Victory came from a goal down to equalise by the interval, but, like so many of his teammates, was more anonymous in the second half as the Roar eventually accelerated away to a 3-1 win. 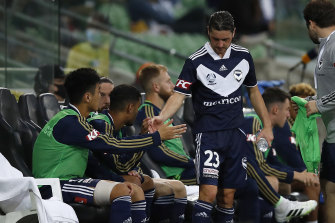 The Kiwi international had been a bright spot for Victory in what was a dismal 2020, and there is genuine excitement about how well he and former Premier League winger Callum McManaman might fare on either flank in Brebner's refashioned squad this season.

But if the results of his assessments are bad, then he could face weeks on the sidelines.

Andrew Nabbout, a former teammate who switched from Victory to City in the off-season, was forced off during his City debut last Tuesday (a 1-0 win in Brisbane) and will miss six weeks with a hamstring injury.

The decision to leave Rojas on – he is one of Victory's most dynamic players – was a calculated gamble. Players rarely volunteer to come off, and Brebner said he would not have allowed him to continue in the first half had he thought the issue was serious.

"Marco indicated that it was okay, I think we could see he did have some issues with it in the first half, but he didn't see it as being too much of a problem.

"If it was, he would've come off straight away. I certainly would've brought him off. He indicated he was okay so I'll see when I have a further chat with him." 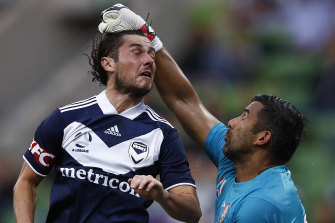 Brebner had been pleased with the way his team had approached the game in the first half and shown character to dominate after conceding an early goal, drawing level through McManaman's terrific long-range strike.

But he admitted he had no inkling that the game would change so much in the second half when the Roar got right on top.

The coach believed that Victory's lack of game time – they had not had a match since early December – and that the players had been trapped in hotel quarantine for a fortnight after returning from their ACL campaign in Doha played a part in their second half fade-out.

"I didn't know where we would be at fitness wise … [but] I didn't see it coming either at half-time. I did think we were very good in the first half and we obviously didn't start in the second and then the goal [Roar got their second on the hour mark] comes at a time for us [where] we did look a little bit flat," he said.

Brebner only has a few days to turn things round once more before Victory head north to Queensland (border closures permitting) to face Brisbane next weekend.