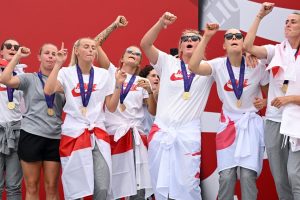 England's Lionesses stand to make a shedload of money off the back of their historic Euros win on Sunday.

The extra-time victory over Germany at Wembley Stadium has been tipped to set up a number of the team's stars to earn millions, according to industry experts. Each member of the squad is set to receive a £55,000 bonus from the FA following the tournament, with some players expected to rake in as much as £4million from brand deals.

Although the average Women's Super League salary is only £30,000-a-year, the likes of captain Leah Williamson and Ballon d'Or winner Lucy Bronze already have lucrative sponsorship deals in place.

David Olusegun, CEO of Creative Control Ventures, has lifted the lid on the potential earnings players could now receive to the Daily Mail.

Super-sub Alessia Russo has been tipped earn £2.5million from sponsorships off the back of her performances in the tournament. Meanwhile, golden boot winner Beth Mead is expected to rake in £2million.

Mead currently earns £25,000-per-year from her Arsenal contract, a salary 15 times less than Cristiano Ronaldo's weekly earnings, and is already an Arsenal athlete.

Both Williamson and Bronze are already amongst the squad's highest earners, but could benefit even further as a result of the Euros triumph.

Captain Williamson has a reported net worth of £4million and an estimated annual salary of £150,000 at Arsenal. With brand deals already in place with the likes of Nike and Pepsi, she has been predicted to double her net worth to £8million in the near future.

As for Bronze, the Barcelona defender already has lucrative deals in place with Pepsi, EE and Visa amongst other brands and has been tipped to pocket an additional £2million from new deals.

In the report, Olusegun explained: “The players will now have the platform to make significant earnings off the back of the competition as they have so heroically captured the hearts and minds of the nation and put the rising stars of the women’s game firmly in the sponsorship spotlight.

“We will see an influx from brands to invest into women’s football and partner with specific players as brand ambassadors to front campaigns and get a considerable earnings potential.

“The success from the Euros will increase the profiles of the players and they have all experienced exponential growth in their social followings, which brands will be very keen to tap into."

England sealed a historic Euros victory on Sunday evening as they avenged their 2009 final defeat against Germany on home soil. Goals from substitutes Ella Toone and Chloe Kelly sealed a 2-1 win after extra-time.