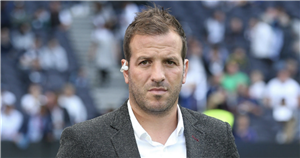 The Dutchman was quite the character on the pitch – famously 'shushing' Arsenal fans after scoring an equaliser against them in 2010 – but off it, he's an even bigger one.

His no-nonsense approach to punditry makes Roy Keane look positively tame and the 38-year-old has demonstrated over the past few years that if he thinks it, he has no problem saying it.

"Where did [Man United] look for him? You'll find players like him at any amateur club in Holland," van der Vaart said.

"I think it is unbelievable. He is no top-class defender – and he demonstrates this every week. If you go out and sign players like him, I can understand why you end up having financial problems."

Van der Vaart has described Chelsea's Timo Werner as "a blind horse", labelled Lionel Messi "shameful" after his performance against Manchester City this week, and wasn't afraid to tell the world what he thought of Harry Kane when the England captain first broke through at Spurs.

"When Harry first came to train with us he was only 18 years old," said the former Holland international.

"He was on the same pitch as us and joined in at training with the first-team squad.

"And when the ball was passed to him, every time I could not believe how he tried to control it.

Who do you think is the most savage football pundit around? Let us know in the comments section below…

Due to his close ties with Ajax, Van der Vaart has also had a lot to say on Donny van de Beek's situation at Man United.

The 24-year-old has struggled to break into the first team at Old Trafford, and Van der Vaart has urged the Dutchman to leave United, laughing off suggestions that he should bide his time and wait patiently for an opportunity.

"Wait? Patience? The players in front of him can’t even kick a marble," he said.

Van der Vaart began his career at Ajax and was quickly heralded as one of Europe's most promising young stars.

He rose through the Dutch ranks alongside fellow prodigies Arjen Robben, Wesley Sneijder and Robin van Persie, and ended up earning over 100 caps for his country.

The midfielder was the inaugural winner of the European Golden Boy award in 2003, and sealed a move to German club Hamburg not long after.

Real Madrid came calling in 2008 but injuries and supremely talented colleagues prevented the Dutchman from properly establishing himself in the first team at the Bernabeu.

He made a last-minute decision to join Spurs on deadline day in 2010 in a move he would later describe as the best of his career.

The midfielder quickly endeared himself to supporters and netted important goals against Arsenal, Liverpool and in Europe during Tottenham's maiden season in the Champions League.

Two year later however, he returned to Germany to re-join Hamburg.

He later described leaving Spurs after just two seasons as the "only regret" of his career.