Home » Soccer » USWNT vs. Canada: Why the Olympic soccer semifinal could be another classic

USWNT vs. Canada: Why the Olympic soccer semifinal could be another classic 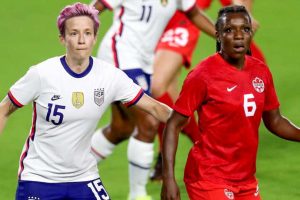 It’s been a while since we’ve seen a USA vs. Canada women’s soccer showdown in a major international competition. After both teams survived their quarterfinals on penalty kick shootouts, the 2021 Tokyo tournament bracket has gifted us the first Olympic knockout match between the two neighbors since 2012. This game will have a berth to the gold medal match as the prize for the victor.

Those were the identical stakes at the London 2012 Olympics when a controversial Alex Morgan stoppage-time goal decided a 4-3 match in favor of the USA just moments before it was to head to a penalty-kick shootout. The Canadians have vowed to get their payback for that result and Monday might be their best chance with the Americans showing they are vulnerable in this tournament, winning just one of its four matches.

Canada’s Olympic dream is to make it to the final, and change the color of the medal from the bronze it won in 2012 and 2016. Meanwhile, it’s not a dream, but an expectation that the No. 1-ranked U.S. women to make it to the gold medal match. They’ve made it to every Olympic soccer final except for 2016 (ousted on penalty kicks in the quarterfinals by Sweden).

”2012 was a long time ago,” Morgan said about facing Canada after the USA’s quarterfinal win over the Netherlands. “We’ve played them every year since then pretty much. And we know them so well. Obviously, a lot of their players play in the NWSL alongside us — opponents, teammates. We’re ready to play them.”

A rivalry just waiting to take off

Although the bad blood is real, mainly from the Canadian side, USA-Canada can’t blossom into a full-fledged rivalry until the Canadian women win some games. For as competitive as Canada’s women’s program has been in recent years, its last win against the USA came way back in March 2001 in a friendly competition. That’s over 20 years and 36 games ago. The USA’s all-time record is 51-3-7.

The 2012 Olympic semifinal was a brief taste of the level of entertaining this border rivalry could become as the Canadian program keeps making strides. The current U.S. Olympic team has seven holdovers from 2012, while the Canadians carry over four:

The two teams also previously met in a 2008 Olympic quarterfinal. The USA won that one, too, and needed extra time to do it, 2-1.

But in the years since the epic 2012 semifinal match, Canada hasn’t really managed to close the gap. In official competitive matches between the two nations — regional qualifying for the Olympics and World Cup — the USA is 3-0-0 with seven goals scored and none conceded.

But Monday has the potential to be a turning point.

The USA may have the most recognized names on its roster from years of winning titles, but the American and Canadian squads have plenty of similarities: from world class players at fullback (Ashley Lawrence vs. Crystal Dunn), to experienced, hard-tackling holding midfielders (Desiree Scott vs. Julie Ertz), creative midfielders known for their unpredictability (Janine Beckie vs. Rose Lavelle), dangerous wingers who can get in behind defenses (Nichelle Prince vs. Christen Press) and veteran forwards still hungry for goals (Christine Sinclair vs. Carli Lloyd).

The talent scale clearly tips in favor of the USA for now, but what might level the playing field in this match is that Canada’s main strength (team defense) matches up well with the USA’s strong suit (attack). Canada is coming off shutting down Brazil’s attack and won’t concede the same spaces to the Americans that the Netherlands did in the quarterfinal stage.

DECOURCY: USA’s Alyssa Naeher wasn’t perfect until she was magnificent

Canadian center back Vaness Gilles single handedly extinguished several Brazilian attacks and alongside fellow center back Kadeisha Buchanan and the fullbacks, Lawrence and Allysha Chapman, they were the stars of the quarterfinal in front of standout PK shot-stopping goalkeeper Stephanie Labbe, who’s on a strong run of form in this tournament.

Canada’s issues will clearly come in the areas of shot creation. Their seven total shots on goal in four matches are the second fewest in the tournament, and their 29 total shots are the fewest of any of the quarterfinalists. Bev Priestman’s team will continue to rely on its speedy wingers, set pieces or moments of magic from Sinclair or Beckie to break through.

So it sets up for another intense, physical, hard-fought matchup between two teams that are both equally hungry to make the gold medal match. Neither will be content with playing for bronze and it should show on the field.