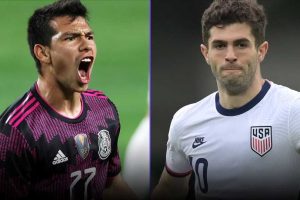 One of the most intense soccer rivalries in the world will see the latest chapter writen on Sunday when the U.S. men’s national soccer team faces its Mexican counterpart for the inaugural CONCACAF Nations League trophy.

Both the USA and Mexico are led by a new generation of talents that have emerged in recent years. The likes of Christian Pulisic (USA) and Hirving “Chucky” Lozano (Mexico) won’t need to be reminded of the long history between these two soccer powers who are in a constant tussle for the right to be called the region’s best team.

Mexico have come away with more victories in their head-to-head battles in championship finals (6 of 7), but this latest showdown should be another evenly matched affair. Both teams had a tough time surviving their respective semifinals — the USA needed a late goal and Mexico won a penalty-kick shootout — and both coaches have lineup and formation decisions to make heading into the match.

Mexico manager Gerardo “Tata” Martino has proven to be flexible with his tactics and personnel so far this year, mixing a four-man defensive line with a three-man back line flanked by wingbacks. Whatever the set-up, “Chucky” Lozano continues to be Mexico’s most consistent performer in attack, although the electric Diego Lainez has also stepped up as a threat in recent matches.

The main questions for U.S. national team head coach Gregg Berhalter revolve around his player selections in midfield and at forward. There is plenty of clamoring for the talented Yunus Musah and Tyler Adams — the latter is “recovered and ready to go” from his injury per Berhalter — but the coach has opted for the same three-man midfield group in the last two games. It’s a similar story at center forward, where Josh Sargent is expected to get a third straight start, although Jordan Siebatcheu scored the winner off the bench in the semifinal against Honduras.

What time is USA vs. Mexico?

The U.S. men’s national team and their counterparts from Mexico go head-to-head in the latest championship final for the title of region’s best team.

How to watch USMNT vs. Mexico in the USA

CBS Sports Network will carry the Nations League final and the broadcast will also be streamed on Paramount+ and on fuboTV (7-day free trial). The match will be available with Spanish-language commentary on Univision and TUDN.

What happens if USA-Mexico is a tie?

Mexico’s No. 1, Guillermo “Memo” Ochoa came up with a decisive save in El Tri’s recent shootout against Costa Rica.

Mexico has faced the USA in seven CONCACAF finals and won all but one (2007 Gold Cup). The USA has also also suffered shutout defeats to Mexico in both matchups (including one friendly) since Gerardo “Tata” Martino took over in 2019.

In fact, Berhalter has yet to beat Martino in head-to-head matchups dating back to their days in Major League Soccer. Martino has won six of the seven direct confrontations, with the other finishing in a 0-0 playoff draw which saw Berhalter’s Columbus Crew team advance in a penalty-kick shootout. Current U.S. goalkeeper Zack Steffen stood on his head in that game.

This Mexico team has a little more savvy than the younger U.S. side and the experienced Martino will have just the right plan to neutralize the Americans’ pressing and buildup. It’d be far-fetched to think that Berhalter would introduce an entirely new tactical look in such a big game after fielding a similar squad in the two most recent outings.

The most attractive odds at the time of publication involve Mexico “to score first and win” at +180. Mexico will get out to a strong start and look to set the tone for the match and disorient the USA. So a first-half goal from Mexico is also a strong possibility (+220 Mexico to win the first half). And if you buy into both scenarios, then Mexico to win at half time AND at full time (+300) is a nice bonus.