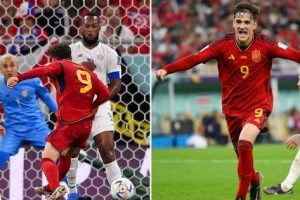 Spanish prodigy Gavi was branded 'unreal' after he scored a goal and provided an assist on his World Cup debut.

Gavi made World Cup history when he became the competition's youngest scorer since Brazil legend Pele in 1958, after scoring in Spain's 7-0 rout against Costa Rica. It was the 18-year-old's first foray in the tournament, but it took him only 11 minutes to make an impact when he assisted team-mate Dani Olmo with a perfectly weighted pass to give Spain the lead.

The midfielder then added Spain's fifth goal in the match after Marco Asensio hit the net, followed by a Ferran Torres double. Gavi rattled the net with a right-footed volley in the 74th minute as Spain ran riot against a hapless Costa Rica side.

And his impressive input led fans to gush over his performance on Twitter. One supporter beamed: "Golden boy for a reason."

Another declared: "Gavi is on another level, 18 years old. Unreal". And a third dared to claim that the youngster's, "already better than (Cristiano Ronaldo)".

But it's not the first time that Gavi's broken a record. He became Spain's youngest-ever representative when he made his international debut in their Nations League semi-final against Italy last October.

At the time, the Barcelona whiz-kid was only 17. And he isn't the only Barca teen making waves at the World Cup for Spain.

Do you think Gavi will be one of the stand-out stars at the World Cup? Let us know in the comments below.

He marshalled the Spanish midfield with 19-year-old Pedri, who was praised for his domineering performance despite not getting on the scoresheet. The Barca duo's displays will have Spain's next opponents Germany quaking in their boots after they fell victim to a shock 2-1 defeat at the hands of Japan in Group E.

However, there were no such plaudits for Costa Rica keeper Keylor Navas who was berated for his blunders in the game by fans. The harsh collective insisted Navas' butter fingers are the reason why he doesn't get to play for his domestic club Paris Saint-Germain.