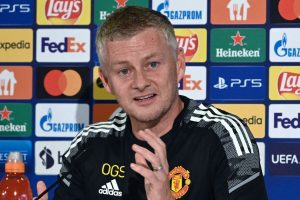 Ronaldo scored a brace on his United return against Newcastle United at the weekend but Solskjaer is now tasked with deciding whether to rest the 36-year-old.

The Portugal striker has been included in the 22-man travelling squad for the match but it is understood Solskjaer will not start him after discussing squad rotation in his press conference on Monday.

"With the ones we've signed it makes it easier to rotate and I've definitely told the team that as well – I do trust all the members of the squad," explained Solskjaer.

As well as Ronaldo, youngsters Anthony Elanga and Matej Kovar have been included in the squad to take on Young Boys, who are managed by former Huddersfield Town boss David Wagner.

Elanga has been brought in after Edinson Cavani was ruled out for a week with a minor injury picked up prior to the Newcastle match.

Anthony Martial will likely be recalled in place of Ronaldo, with the all-time leading Champions League goal scorer waiting in the wings if needed.

Diogo Dalot, Eric Bailly, Donny van de Beek and Jesse Lingard could all earn their first starts of the season with many of Solskjaer's players having yet to miss a minute of action.

Should Cristiano Ronaldo be rested for Manchester United's Champions League opener? Let us know in the comments section below.

Bailly will likely pair Victor Lindelof at the centre of defence, with Raphael Varane and Harry Maguire having played the last two matches and Maguire yet to miss a minute.

Alex Telles' absence from the squad means that Luke Shaw will keep his place in the side, with Paul Pogba and Jadon Sancho expected to do the same.

Fred may be recalled in place of Nemanja Matic, who started the weekend win at Old Trafford, with Scott McTominay still sidelined with a groin injury.

David de Gea will start in goal and likely captain the side, with Kovar and Tom Heaton the only other goalkeepers included in the squad.

de Gea's main challenger for the number one shirt, Dean Henderson, is continuing his comeback from illness and has not travelled after playing for the under-23 side on Sunday.