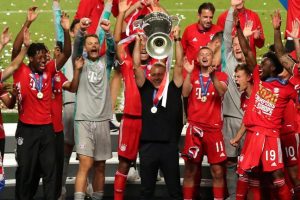 Europe’s governing body for football approved changes that will see the number of teams competing in the Champions League rise from 32 to 36, while the group stage will be replaced by a single league stage, known as the ‘Swiss model’.

The alterations to the competition will see teams play at least 10 games in the first stage, up from six in the present format, much to the frustration of Baer-Hoffmann as well as players and managers alike.

“We’ve seen this for a number of years, whether it was the Club World Cup, the Nations League or commercial tours ahead of a new season – there is generally little regard for the impact the calendar has on players’ health and their performance,” Jonas Baer-Hoffmann told Sky Sports News.

“The attention to the health has been completely lacking for years – we’ve presented on this to a number of bodies, including UEFA, but we don’t see it trickle down in the decision-making process.

“If players start to get injured or start to miss games that doesn’t help anyone.

“These players want to play but they want to play at the highest level they can and frankly value is not just created by the quantity of matches but the quality of them.”

Instead Baer-Hoffmann believes a reduction in fixtures across the global games actually makes it more commercially lucrative – citing the Premier League and America’s NFL as successful models.

“Arguably there is already too many games for players which is why there is a massive battle between domestic league football and international teams,” Baer-Hoffmann added.

“But if you look at the revenue development over the last couple of decades in competitions that haven’t added any more games, such as the Premier League or NFL, they’ve doubled their revenue in the last decade without adding a single extra match.

“So the equation is simply not that more games means more money to sufficiently sustain the industry.

“We’ve been pushing for much stricter regulations, providing minimal rest and recovery between games, in mid-season and off-season.

“But that obviously means you need a bigger rotation and more players to distribute through the game as they will not be able to play in all the games – there’s no other way.”