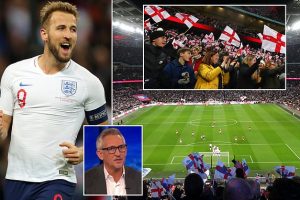 A plan to play every game of Euro 2020 in England is being considered by UEFA, according to a member of the organisation’s executive committee.

As it stands, tournament organisers want the delayed competition to take place as planned in a number of different countries across Europe but that may not be possible due to the varying Covid-19 restrictions.

One solution would be to host Euro 2020 in it’s entirety in one location, with England considered the front-runner. 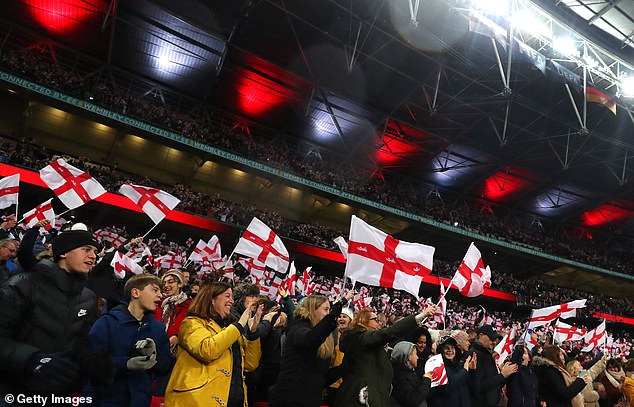 The entirety of Euro 2020 could be played in England, according to a UEFA committee member 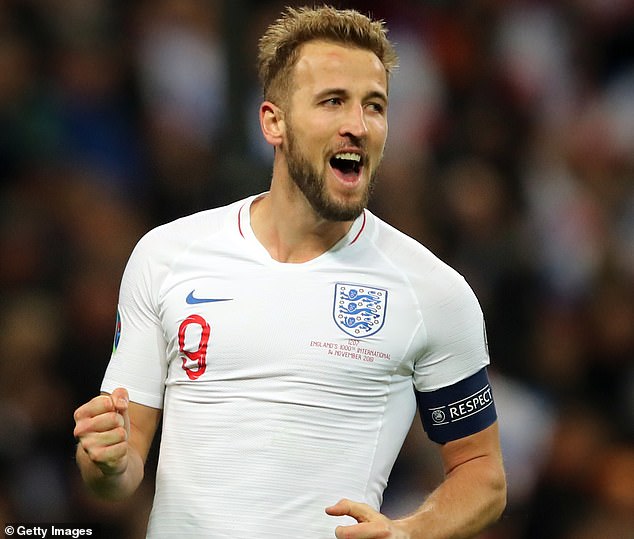 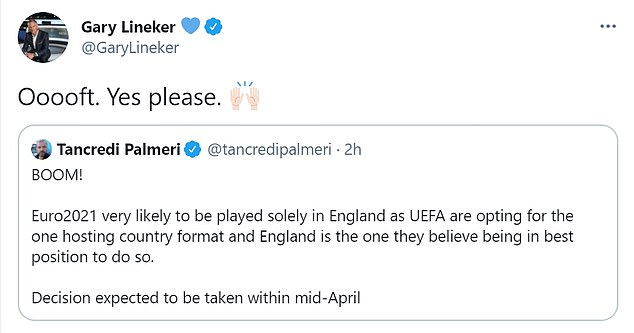 Gary Lineker is among those to back that plan, writing: ‘Ooooft. Yes please’, in response to the possibility.

Armand Duka, a member of UEFA’s executive committee and president of the Albanian FAsaid on Radio Kiss Kiss Napoli: ‘It doesn’t depend on UEFA, it’s up to the authorities in each country.

‘They’ve decided to do it (let fans in) in England, we hope it will soon happen in the rest of Europe too.

From May 17, indoor venues will be allowed to admit up to a maximum of 1,000 spectators, or half their capacity if that figure is lower.

For outdoor events, there will be a maximum of 4,000 fans allowed, or half a venue’s capacity (whichever figure is lower).

However, at the biggest stadiums, such as Wembley, a maximum of 10,000 fans will be allowed, or a quarter of capacity (whichever figure is lower).

Plans are being put in place for a possible return to capacity at stadiums for Euro 2020 so 90,000 may end up watching at Wembley in a glorious return to normality.

‘There are still four or five months left, let’s see if the situation will change. If not, England remains a possibility.’

The UK’s vaccine programme is putting the country on track for a return to normality from June 21, according to Prime Minister Boris Johnson.

This means fans would be able to watch the games rather than suffer empty stadiums elsewhere in Europe where Covid-19 remains a threat.

The vaccination rate across Europe has been lower than in the UK. Germany, for example, have only vaccinated 6 per cent of the population so far compared with Britain’s 27 per cent.

A lack of trust from many Germans in the AstraZeneca jab has caused a ‘psychological problem’, according to Professor Thomas Mertens, who chairs Germany’s Standing Commission on Vaccination.

Much of Europe remains on a similar vaccination percentage to Germany so there is a likelihood they will be far behind the UK by the time the Euros come around.

Wembley is already playing host to the semi-finals and final and England seems the natural choice if UEFA choose to go down the path of a single host nation.

The Government is developing the existing NHS app to record vaccination or negative tests so sports events can have full houses.

A programme of research events is being established to test how Covid spreads in crowds where people have received vaccinations or tested positive.

According to The Sun, the existing NHS COVID-19 app, which has already been downloaded 20million times, could be adapted to show that people have been vaccinated or tested negative for Covid prior to an event.

A source told the newspaper: ‘There are people actively working on adding it as a function. It would be the easiest thing to do as so many people already have it. 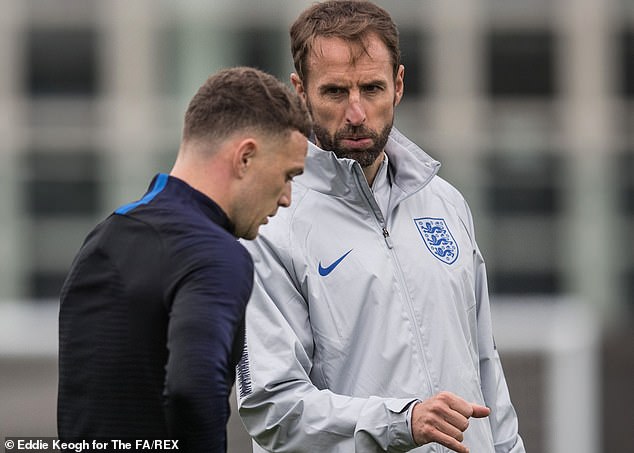 ‘The app’s been seen as a bad thing — that you might get pinged — but this usage would definitely be for good.’

Sportsmail understands the tests would start small and gradually be ramped up, with extensive analysis after each event.

Up to 10,000 fans will be allowed back into sports venues from May 17 and the Prime Minister is ‘very optimistic’ full capacity will be possible from June 21.