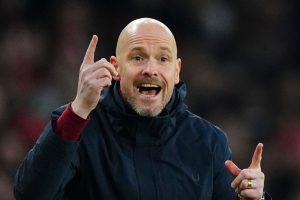 Mikel Arteta's side were forced to come from behind after Marcus Rashford nutmegged Thomas Partey and found the back of the net with a terrifying drive from 25-yards. However, Nketiah levelled the scoreline six minutes later, capping a wonderful Arsenal move by ghosting in at the back post and beating David De Gea with a bullet header.

The second half began in similar fashion to the first, except it was the Gunners who took the lead. The tenacious Bukayo Saka cut inside of Christian Eriksen and whipped a wonderful effort into the far corner from 25 yards. However, Arsenal's lead lasted the same amount of time as United's, as Lisandro Martinez took advantage of Aaron Ramsdale's dropped cross, expertly craned his neck downwards before exploding upwards and looping a wonderful header over the former Sheffield United goalkeeper's head and into the back of the net.

Nketiah thought he won the game when he swivelled and unleashed a powerful effort from eight yards out, but David De Gea somehow got down to his left hand side and palmed the ball away to safety. However, the prodigal forward who has been filling the deep boots departed by the injured Gabriel Jesus, made up for it by tapping Odegaard's deflected effort in at the back post. Daily Star Sport considers what Erik ten Hag got right and wrong in North London.

Aaron Wan-Bissaka’s renaissance under Ten Hag continued against the Gunners. Before the World Cup, the former Crystal Palace defender only had four minutes of Premier League football to his name under the Dutchman.

While he did fall asleep for Arsenal’s goal, Wan-Bissaka is getting closer and closer to his rock solid and arrogant best. Pitted against speed machine Gabriel Martinelli, Wan Bissaka stepped into the inside of the pitch and dared the Brazilian to try and beat him for pace down his flank. =

Wan Bissaka has always been a master for his ability to shackle pacey forwards, he looks more comfortable and confident on the ball, particularly when he is receiving short in his own half.

Where do you think Manchester United will finish this season? Let us know in the comments section below

With Casemiro suspended, all focus gravitated towards Ten Hag’s choice of midfield. Considering Arsenal’s excellent form and the impact the former Real Madrid legend has made protecting the United defence, many were expecting the reunion of McFred.

However, the reunion of the iconic two man band will have to wait, as Ten Hag opted to partner Scott McTominay alongside Christian Eriksen. This came as somewhat of a surprise as the Gunners’ brilliance at playing through the lines would often call for the inclusion of another defensively minded midfielder.

Unfortunately, this did appear to bite United on the backside, as Odegaard and Granit Xhaka repeatedly found space in between the United midfield and defence. The classy Arsenal duo combined with each other to find the half spaces between Wan-Bissaka and McTominay for the first Gunners’ goal.

Fred's defensive instinct was most evident when Saka chopped inside Eriksen moments before he majestically found the far corner for the second goal. Ten Hag very rarely gets things wrong, but his choice of midfield may well have been too brave.

Wout Weghorst’s inclusion was a huge surprise. After enduring a quiet debut in the 1-1 draw against Crystal Palace, the Dutchman starting United’s biggest match to date is not something many would have expected.

A dynamic frontline of Alejandro Garnacho, Rashford, and Antony would have been may people’s first choice, particularly against a very high North Londoners’ backline. However, Weghorst’s pressing ability is deceptively impressive for a man towering at around 6 ft 6 inches.

His physical presence also gave United an extra dimension, as the Red Devils were able to bypass the Arsenal press by finding the ex-Burnley forward with a lofted pass, or they could launch it down the pitch as a way to relieve pressure from Arsenal’s lightning fast press. While he may not be at United for the long term, he is certainly a useful, cost-effective option for Ten Hag.

At times, United’s football has been scintillating under Ten Hag. However, De Gea’s passing and distribution is certainly proving to be a weakness.

The Spaniard looks remarkably stiff when the ball is played into his feet and opposing fans are beginning to target him. After he spooned an attempt of a long pass to Luke Shaw into the stands, Arsenal fans began to jeer and scream every time the ball was passed back to him.

If Ten Hag is insistent on his backline and goalkeeper playing out from the back, De Gea’s lack of confidence with the ball at his feet could very well result in the shot stopper gifting one or two chances per game. With United appearing to be on the cusp of a title challenge, they cannot afford to give away any more cheap goals.