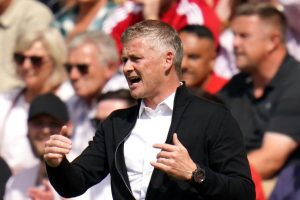 Manchester United were forced to settle for a 1-1 draw with Southampton on Sunday afternoon.

The Saints took the lead in the 30th minute after Jack Stephens left Bruno Fernandes in a heap on the right.

The centre-back fizzed a ball across to Moussa Djenepo, whose first-time ball to Adam Armstrong was flicked on to Che Adams, who took a couple of touches and struck home from 20 yards via a deflection off Fred.

United were dominant throughout the clash at St Mary's and deservedly grabbed an equaliser 10 minutes into the second half.

Paul Pogba poked a Fernandes ball on to Mason Greenwood, whose shot beat Alex McCarthy and found the back of the net in front of the raucous travelling support.

Ultimately, though, it was a frustrating afternoon for Ole Gunnar Solskjaer. So, what did the United manager get right and wrong? Daily Star Sport takes a look…

Jury is out on Martial

Anthony Martial was given a chance to stake a claim for a regular starting spot – but he largely underwhelmed against the Saints.

The Frenchman led the line for United, playing in a central role while Greenwood, Fernandes and Pogba provided support for the No.9.

However Solskjaer will have learnt very little from Martial on Sunday, with the striker enduring a quiet game and he barely tested Southampton's defence.

He had a couple of openings in the first-half, included an effort that was cleared off the line, but United needed more from Martial and he didn't deliver.

The second-half was more of the same too, as Martial offered little going forward – and it was ultimately left to Pogba and Greenwood to provide the attacking threat.

Where will Manchester United finish this season? Let us know in the comments section below.

With Scott McTominay struggling for fitness, Nemanja Matic was drafted in alongside Fred to form United's defensive-midfield shield.

But the pair endured tough afternoons – and their frustrations were evident as they complained over several refereeing decisions throughout the match.

Fred in particular was left reeling when first-half decisions went against him, while Fernandes also made his feelings clear when things didn't go his way.

Solskjaer needed calm performances from his midfielders at St Mary's – but got the opposite.

And while the United boss will be concerned that his experienced midfielders struggled against Southampton, at least it highlighted the importance of McTominay.

Much has been said of Pogba and the uncertainty surrounding his future at United – but one thing's for sure, the Frenchman seems bang up for this season.

After providing four assists in the Red Devils' season-opening 5-1 win over Leeds last weekend, Pogba pulled the strings in the middle of the park again against Southampton.

On several occasions in the first half, the midfielder showed superb vision to thread through Martial; only for his compatriot to waste the opportunity.

Even when United went 1-0 down, Pogba remained heavily involved as United chased an equaliser.

Indeed, the midfielder played a crucial role in the Red Devils' equaliser, playing in Greenwood who poked home in the second half.

The Frenchman is undoubtedly a leading figure in his United squad and Solskjaer will need Pogba to bring his a-game every week if his side are to mount a challenge for the Premier league title.