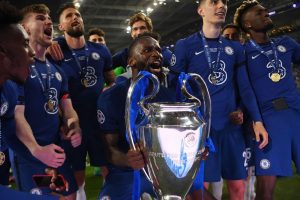 Chelsea’s European dominance has been reflected in this season’s UEFA Player of the Year award.

N’Golo Kante and Jorginho’s performances for The Blues as well as Italy and France respectively, earned the midfield pairing nominations for the UEFA best player award.

It is a staggering achievement considering Jorginho was barely getting into the Chelsea team before Thomas Tuchel’s arrival.

However, Thomas Tuchel replaced the Chelsea legend who was sacked in January, and immediately restored the Chelsea vice-captain into the starting XI.

They went on to start both legs of Chelsea’s semi-final against Real Madrid as well as the final against City.

Jorginho also became only the 10th player to lift the Champions League and the European Championship in the same season.

Can Chelsea defend their Champions League crown? Comment below

While he may have missed a penalty for Italy in the final against England, he started every game and only failed to play the whole match on one occasion.

Kevin De Bruyne was also nominated by the UEFA jury after he pulled the strings in Manchester City’s Premier League title triumph and their journey to the Champions League final.

All three players received more votes than both Lionel Messi and Cristiano Ronaldo who missed out on the nominations for the second consecutive year.

The UEFA jury who nominated the players is made up of the coaches of the 24 teams who competed in EURO 2020, as well as the managers of all 80 teams who took part in the Champions League and the Europa League.

55 journalists who were selected by the European Sports Media group were also involved in the nominations – the winner will be named in the Champions League draw on the 26th August.