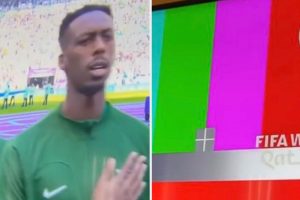 Coverage of the World Cup match between Saudi and Argentina began at 9am in the UK, but viewers briefly lost pictures just before kick-off. The incident happened as Saudi Arabia sang their national anthem, with the ITV screen cutting away to a colourful backdrop along with static sounds.

The pictures dropped twice, forcing ITV commentator Sam Matterface to apologise for the mishap after images had been restored.

He said: "Welcome back here to the Lusail Stadium, north of Doha. Firstly, we’d like to apologise for the brief loss of pictures during the Saudi national anthem."

But that wasn't enough to placate World Cup fans who had tuned in for the 10am kick-off. One raged: "Loss of pictures during Saudi National anthem hmmmmm."

Did you experience a loss of pictures during Argentina vs Saudi Arabia? Let us know in the comments section.

The 2022 World Cup may only be three days old, but it is the second time a UK broadcaster has been forced to apologise for the loss of pictures.

BBC host Gary Lineker was forced to say sorry during half-time in England's 6-2 win over Iran on Monday due to issues with the BBC iPlayer feed.

He said: "Just a quick pointer, apologies if you’ve had any BBC iPlayer issues during that first half. We’re working to fix them."

That was followed by a statement from the BBC, which read: "We’re aware of an issue affecting some users on BBC iPlayer. We’re trying to fix this as soon as possible."

Thankfully for ITV, pictures were restored in time for kick-off, which meant fans were able to witness Lionel Messi putting Argentina 1-0 up from the penalty spot against Saudi Arabia.