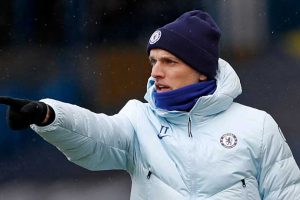 Thomas Tuchel said that Chelsea showed a “lack of concentration” as the German manager believes his side lost control of the game in the second half of Sunday’s FA Cup win over Sheffield United.

The Blues were able to seal a 2-0 win on Sunday, with Oliver Norwood’s first-half own goal and Hakim Ziyech’s 92nd minute finish proving enough to seal a spot in the semi-final round.

Tuchel, however, wasn’t pleased with the Blues’ performance, as he was left disappointed by what turned out to be a disjointed second half.

“It was a good first half but in the second half, we lost control,” he told BBC Sport. “We were clearly tired after 14 games consecutively, I could feel us tired with a bit of a lack of concentration.

“There were many little faults with a strong opponent in the second half. We were lucky in the second half to keep the clean sheet. I think it is the first time in the 14 matches where we were lucky. It can happen and, in the cup, it is important to go through and this was the target. We reached it.

He added: “Of course, we let them come back because we had full control in the first half. In the second half, we had a big chance with Christian [Pulisic] to finish the game early. After that, we had too many easy mistakes, lost duels and lost concentration and momentum.

“Honestly, I could feel in training in the last days that we were a bit tired with a lack of concentration and things were not too easy. It is normal that it can happen in a game where it is difficult to keep the level up. I was happy to help the guys from the bench with the guys who came in. In the end, we have a win and we will take it.”

The German may have been less than impressed with his side’s overall efforts, but he cannot doubt their defensive credibility now, with today’s result taking them to seven games on the trot without conceding a goal.

That run of clean sheets equals their best run since December 2005, when Jose Mourinho was at the helm at Stamford Bridge – and trails only one such streak overall, when they notched nine games without conceding between November and December 1905.

What’s next for Chelsea?

The Blues will now head into the international break on a high, having sealed their semi-final spot in the FA Cup.

Awaiting them in the semi-finals are Manchester City, Southampton and either Leicester or Manchester United, with those matches set to be played on  April 17

Chelsea currently sit fourth in the Premier League and will face West Brom upon their return from the international break.

But that’s not all for Tuchel’s team, though, as a Champions League quarter-final clash with Porto also looms, with the first leg set for April 7 in Portugal.

Marko Marin: ‘The German Messi’ who shone alongside Ozil but failed at Chelsea