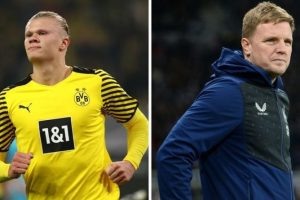 The January transfer window is in full swing now with the rumour mill in overdrive and deals getting done as clubs look to strengthen mid-season.

Newcastle landed the first major signing of the window on a blockbuster day yesterday when they completed a £12million deal for Kieran Trippier to kick-off their new era of spending.

Aston Villa made a marquee signing of their own hours later by bringing in Philippe Coutinho on loan from Barcelona.

Everton have also been busy in the early stages of the window, signing Vitaliy Mykolenko and Nathan Patterson as their owners back Rafa Benitez in the market.

The ‘Big Six’ have been quiet so far but have all been linked with January moves.

Manchester United are on the lookout for a midfielder but may wait until the summer while Thomas Tuchel confirmed yesterday that Chelsea have discussed transfer plans with a new left-back on the agenda.

Arsenal are pushing to sign a number of strikers, while Liverpool weigh up whether or not to sign temporary replacements for their AFCON stars, including Mo Salah and Sadio Mane.

Manchester City may have a quiet window, though Antonio Conte and Tottenham are expected to be busy with the Italian demanding cash to spend this month.

Daniel Levy flew out to the Middle East to hold talks with owner Joe Lewis about making funds available for Conte, with several stars being eyed up.

Wolves star Adama Traore is one of many on Spurs’ radar and is said to be keen on move, so is one to look out for this month.

It is notoriously hard to do business in January, but the winter window normally throws up one or two surprises.

But fear not as Express Sport will have you covered every step of the way, with all the latest news, gossip and developments across Europe.

Make sure you stick with us here today as we will be providing live updates on all things transfers.

Hello and welcome to Express Sport’s live transfer blog as the January window rolls on.

The mid-season market is fully underway and the rumour mill is heating up as clubs actively look to bolster their ranks.

Stay with us for regular updates from the Premier League and elsewhere throughout the day!