Transfer news LIVE: All the latest as Barcelona weigh up Sanches swoop 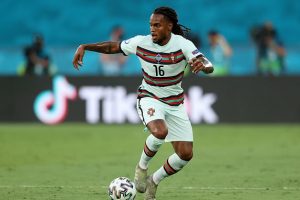 Transfer news LIVE: All the latest as Barcelona weigh up Renato Sanches swoop and more as top clubs across Europe plot big moves this summer

The summer transfer window is alive and kicking as clubs throughout Europe look to cement their squads ahead of next season.

It’s the future of Tottenham striker Harry Kane that will dominate much of the headlines until the close of the window at 11pm BST on August 31.

Manchester City are the favourites to land the England captain, and Sportsmail also understands they are confident of securing a £100million move for Jack Grealish following the conclusion of Euro 2020.

Meanwhile, Manchester United are on the verge of announcing Jadon Sancho’s move from Borussia Dortmund, while Arsenal have reportedly made progress in their attempts to sign Ben White after agreeing a £50m deal.

Sportsmail will keep you up-to-date with the latest negotiations, rumours and done deals below.

Barcelona keen to fight Liverpool and Tottenham for Renato Sanches

Good morning all, straight into the deep end with our first story!

Renato Sanches impressed for Portugal at Euro 2020, but despite Barcelona’s interest they may only be able to offer a loan deal for the Lille star.