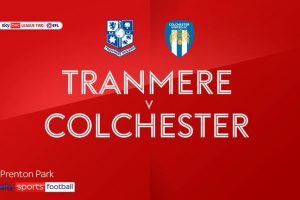 Keith Hill’s men, who were real contenders for automatic promotion a few weeks ago, went into the game knowing that results elsewhere would not matter if they could pick up a final day point.

Aside from an Otis Khan effort and two half-chances for Paul Lewis and Corey Blackett-Taylor, the first period was devoid of any real attacking quality.

Tranmere had control of the opening half, however, after offering little in the opening 45 minutes, it was the U’s who should have taken a second-half lead.

Veteran keeper Joe Murphy first denied Michael Folivi from close before getting down well to keep out a low strike from Noah Chilvers.

Rovers then settled into the half but despite having spells of possession they failed to trouble keeper Shamal George.

The U’s went again late on, however despite a long-range Chilvers effort, Rovers were able to soak up the pressure and see the game out.