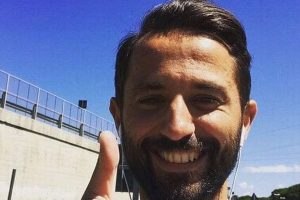 He was the Italian footballer claiming to be the next Francesco Totti, who tried to trick his way into the professional game but was rumbled before his tragic death.

Alessandro Zarrelli claimed to have been a youth-team player at Sheffield Wednesday, Glasgow Rangers and MK Dons when he tried to join clubs in Wales and Northern Ireland back in 2005.

The midfielder, with a 'brilliant left foot,' also told Bangor City, Connah's Quay Nomads and Lisburn Distillery – who he briefly signed for – that he was in Britain as part of a cultural exchange programme organised by the Italian FA.

But his elaborate hoax was revealed when he was caught out a year later by Sky TV programme 'Superfakes' after they set up a sting operation to make Zarrelli believe he was talking to a scout about another move.

A presenter soon interrupted the meeting to tell the then 22-year-old his stories did not add up.

The Italian quickly admitted he never played for the clubs he said he had and his 'agent' Matteo Colobase did not exist.

When questioned about why he carried out the elaborate lie he said: "I always wanted to play football – that is it."

Zarrelli ended the interview and left the room with his reputation in tatters.

He later rang the journalist who exposed him and said: "I want to thank you for everything because now people know me. They know I am a big son of a b****."

The strange football saga had started in 2005 when Bangor City received a letter from the Italian FA offering them 21-year-old Zarrelli for a year.

The letter described Zarrelli as a 'brilliant left-footer." At the end of the year, the Italian FA would pay Bangor City 2,000 euros.

Former Man United star Peter Davenport was the manager of Bangor City at the time.

He told the documentary, Allesandro Zarrelli super faker: "We were to receive a player on loan from the Italian Football season and they would pay us 2,000 euros. For a club like Bangor that was a lot of money.

"This Zarrelli had scored 14 goals in 42 games according to the Italian FA. This was the difference between us qualifying for Europe or not."

In Bangor, he made a big impression on the locals.

Gwyn Williams, proprietor of the Regency Hotel, said: "He had all the patter and dressed in expensive clothes. He was a good-looking lad and according to a couple of local girls who met him at the Octagon club, he was a very good dancer."

Zarrelli made his debut but Davenport said he soon disappointed and it was clear he was way off the grade.

He said: "He didn't look the part – he didn't look good enough. We were expecting a new superstar from Italy but he wasn't what we expected. I wasn't impressed and neither were the players."

Former player Michael Burke said: "It was comical. He played like a Sunday league player – he had no skills."

Calls were made to the Italian FA to check out his credentials and he was rumbled.

He was asked to leave the club and the Regency Hotel.

It then emerged he had operated a similar ruse with Lisburn Distillery in Northern Ireland.

In his first match, the players laughed at his ability and the club made the decision to dispose of his services.

The club were left with a huge phone bill racked up by Zarrelli racked up ringing clubs in the UK, Europe and even Australia trying to get a move.

Zarrelli then posed as fake agent Colebase to ring up the chairman of Connah Quay's Nomads but they also became suspicious.

Word had spread and shortly after, Zarrelli was exposed by the Super Faker documentary.

Back in 2012, he arrived at Thurlow Nunn First Division club Downham Town where boss Pete Brassett gave him another chance, despite knowing his past.

Zarrelli went on to make 14 appearances for the club and joined 15 more non-league clubs, ending at Sholing where he made just one appearance in 2018.

All in all, he made 261 appearances with non-league clubs, scoring nine goals.

But tragedy was to strike back in November 2018 when Zarrelli was killed near Duxford, just outside Cambridge after his blue Mini collided with a brown Volkswagen Caddy van.

The then 34-year-old sustained multiple injuries in the tragic collision on the road between Royston and Duxford.

An inquest revealed he had been driving on the wrong side of the road.

He was rushed to hospital but had sustained damage to his heart, lungs and head and later died.