Home » Tottenham's pivotal month: How Spurs' next steps could be shaped by key April Premier League and Carabao Cup fixtures

Tottenham's pivotal month: How Spurs' next steps could be shaped by key April Premier League and Carabao Cup fixtures 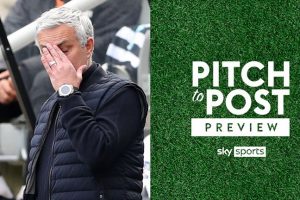 With key fixtures in the top-four race and a Carabao Cup final in April, this month could be a decisive one for Tottenham under Jose Mourinho – and the futures of their star players.

The Portuguese boss must have wished he could have restarted the month after a frustrating 2-2 draw at Newcastle last weekend saw Spurs fail to capitalise on Chelsea’s shock defeat to West Brom but with Manchester United up next on Sunday Mourinho’s men need to find an instant response to that setback.

Spurs sit three points off fourth-placed West Ham, with Premier League games against United, Everton, and Southampton in the coming weeks, before they take on Manchester City in the Carabao Cup final on April 25.

That run of games makes this month a pivotal one in terms of how their season will be viewed.

Sky Sports News reporter Paul Gilmour, who covers the club closely, joined the Pitch to Post Preview Podcast to explain the bigger impact a strong run of results – or more slip-ups – could have.

“If Spurs don’t finish the season with top four or winning that cup final a lot of questions will be asked,” he said. “That’s the nature of big clubs.

“But they are in a cup final, they are still in top-four contention… and how many times have a team in the top six put a run of wins together and things are so different?

“Imagine Tottenham win the League Cup and qualify for the Champions League next season – all of a sudden that feels a lot better than what it currently feels like. It’s an unpredictable league, it’s a tough league – but it’s clearly an important month.

“It’s something they have to get right – and what a game to bounce back from against Newcastle with Manchester United this weekend. That will lay down a marker in terms of where they’re at. Suddenly beat United and it looks rosier from a top-four perspective.

“When we get into this business end of the season, that’s how plans are shaped for next season.

“Do the hierarchy suddenly think changes will happen if things don’t go well? And by changes what form those changes come in remains to be seen. Could it be a player clear out? If Harry Kane goes is there a chance to reinvest money in the squad? Will Mourinho do that rebuild or will he go?

“Time will tell and April will certainly be a significant month.”

‘Important decisions all round need to be made on Kane future’

The future of Kane, in particular, has come into focus over the past week or so, with the striker asked about where his future lies during the recent international break.

The England captain is contracted to Spurs until the summer of 2024 but speculation about whether he will leave the club in search of more silverware opportunities has been a talking point throughout recent transfer windows.

Gilmour believes Kane’s recent quotes on the topic have only added to the intrigue and discussion.

“We know it’s well documented, the interview he did with Jamie Redknapp during lockdown and in more recent times during the international break, he was asked about the speculation and would he have to leave Tottenham to win major trophies and he said, ‘I think that’s a hard question to answer right now’.

“He went on to say, ‘I try to stay out of that speculation as much as possible, I’m fully focussed on doing the job on the pitch from now until the end of the summer and then we’ll see where we go from there’.

“Now that is an interesting sentence – ‘we’ll see where we go from there’. 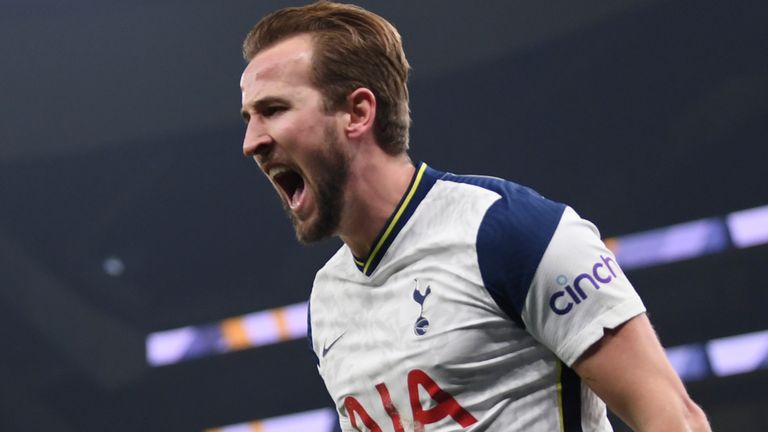 “He’s reaching a stage where he’ll be 28 after the Euros and this is obviously a massive summer ahead for England and Harry Kane.

“In an ideal world he would finish the season strongly and take that form into England, the big stage, which is perfect for a player of his quality.

“But from the club point of view, there’s no doubt he’s been an incredibly loyal player for Tottenham. If he leaves it would certainly be the major talking point of the summer.

“He’s right up there with Robert Lewandowski. Two players doing it on a regular basis at the very highest level and clearly there will be a lot of interest in Harry Kane if he decides to leave, if Tottenham decide to sell him.

“The price would obviously have to be right, which brings its own problems in the middle of a pandemic. But there are clubs out there that will be able to afford him, there’s no doubt about that. And then it’s a case of important decisions all round which have to be made.

“As we sit here in April it’s probably too early to tell but over the next month or two, as we get to the end of the season, that’s when – if there is a big move to be had – that will start to heat up a little bit.

“It’s going to be really interesting to see what the next months bring. It’s unthinkable if he were to leave Tottenham, you’re so used to him in that Tottenham shirt, we know of his love for the club, the thought of him in another shirt would be one of those moments where you go, ‘wow’.

“But whatever club he goes to has the potential to dominate given they will have one of the world’s best goalscorers. Tottenham will obviously be desperate to keep him. It’s an ongoing situation.

“That [interview] was the opportunity to do it [say he was staying]. He’s always in the past said, ‘I’m committed to Tottenham’…

“We know he loves the club but there’s been none of that talk in interviews in the last year. It’s certainly one for us to monitor and keep an eye on…”

In this week’s Pitch to Post Preview Podcast Peter Smith is joined by Sky Sports News reporter Paul Gilmour who explains why April could be a decisive month for Tottenham’s next steps as a club, while Sky Sports football writer Jack Wilkinson reacts to Man Utd’s Europa League win and assesses their chances of getting some revenge for their big defeat to Spurs earlier this season.

Sky Sports features writer Nick Wright is also on the show, looking back at two contrasting performances from Liverpool and the reasons behind their inconsistency, as well as previewing a big top-four race clash between surprise package West Ham and Leicester. He also makes his Pitch for the weekend about an important game at the other end of the table between Burnley and Newcastle.