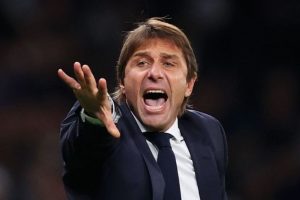 Conte lays down law to Tottenham players ahead of Burnley match

Tottenham boss Antonio Conte has aimed a stinging dig at rivals Arsenal by insisting that they are not among the ‘giants’ of the Premier League. The Italian recently replaced Nuno Espirito Santo at Spurs but has already attempted to stir the hatred between the North London rivals.

Conte has endured a difficult start to life at the Tottenham Hotspur Stadium and that was compounded by Thursday’s humiliating Europa Conference League defeat by NS Mura.

Ten-man Spurs were beaten 2-1 by the Slovenian minnows, conceding an incredible last-minute winner.

Conte has won just two of his four matches in charge, with his first Premier League success being the 2-1 win over Leeds United last week.

There has also been a tense victory over Vitesse in Europe and a goalless draw with Everton, in which Spurs failed to have a shot on target.

But Conte has already taken a dig at rivals Arsenal. The 52-year-old excluded the Gunners from the Premier League’s elite clubs and instead believes they are on a par with West Ham and Everton.

“The team is young and has a lot of room for improvement, but the competition is fierce with the four giants Chelsea, City, Liverpool, United, and then Arsenal, West Ham, Everton,” he said in an interview with La Gazzetta dello Sport.

Arsenal defeated Newcastle 2-0 on Saturday, in a positive response their 4-0 thumping by Liverpool last weekend.

“We had to be patient. They defended really well and made it difficult for us in the first-half,” winger Bukayo Saka said.

“The boss told us to not let them frustrate us, and I think we listened to that, got the goals and could’ve got more at the end.

“Yeah it was a great passing move. I came from the left and we made a few passes and then made a run and found myself on goal and scored.”

Meanwhile, Arsenal boss Mikel Arteta has once again said that he would like legendary former manager Arsene Wenger to return to the club.

Wenger is currently FIFA’s head of global football development and has not coached since he departed Arsenal in 2018.

“I personally think everybody [that] works here and everyone at the club, what we feel towards Arsene is gratitude,” Arteta reiterated on Saturday.

“Me, because I know I wouldn’t be sitting here [without Wenger], and what I’m saying is that I think he will enjoy at least being more around.

“I know he needs his space, but just being around and having the feeling of how much people love him, I think it would be great for him.”

Conte will face his first North London Derby on January 16 when his side host the Gunners.