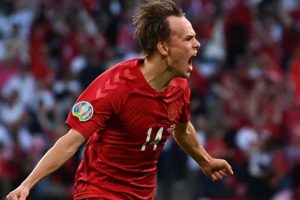 In pictures: Tottenham ease to win at Colchester

Tottenham have not yet made a “real call” over Euro 2020 star Mikkel Damsgaard, according to Sampdoria director Carlo Osti. Spurs have been linked with a move for the Denmark star before the transfer window shuts after reportedly scouting him during the European Championship finals, while Barcelona, Juventus and AC Milan are also said to be keen.

Damsgaard scored two goals in five games for Denmark at the tournament finals – including his free-kick which threatened to knock England out at the last-four stage.

His performances brought him to the attention of some of Europe’s top clubs, with reports from Italy claiming both Tottenham and Barcelona had the 21-year-old watched during his nation’s games.

Juventus and Milan have also been linked with Damsgaard, who was mainly deployed on the left wing during Euro 2020 but proved highly versatile for Sampdoria last season, playing in a variety of positions including as a central midfielder and a second striker.

However, Sampdoria chief Osti has claimed there have been no concrete offers so far for a player whose value has shot up to around €40million (£34m) after the Serie A club signed him for just €6.5m from from Nordsjaelland last summer.

JUST IN: Atalanta ‘have change of heart on Cristian Romero’ as Barca join race

“We haven’t received a real call yet,” Osti told Il Secolo XIX, cited by Football Italia, before going on to say that clubs are being more selective in their approaches post-pandemic.

“The Covid pandemic has highlighted a new tendency,” he added. “The fewer players you have, the richer you are.

“Today, a manager must recognise the players’ qualities, making as few mistakes as possible.”

A Premier League move would be the most likely solution if Sampdoria did end up parting ways with their man this summer, according to Calciomercato.

The report claimed that several English clubs had already reached out to the player’s agent, with Leeds United, West Ham United and Leicester City all previously credited with interest in the Danish ace.

However, club president Massimo Ferrero recently underlined Damsgaard’s importance to Sampdoria, declaring he would not be available for transfer unless a move was in the best interests of the club.

“I expected him to be this good at the European Championship,” Ferrero told a press conference earlier this month.

“But he is not for sale. Either they bring something that makes [sporting director Carlo] Osti excited, or he won’t be sold.

“It’s no longer the same as before when one offer arrived, and we would sell the player. Now we want to make another stand.

“We want to keep the footballer, we want to enjoy him.”

Do you want an exclusive pre-season preview for YOUR club – both in your inbox and through your letterbox? Head over here to find out more and secure your copy