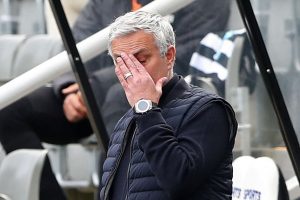 Tottenham have appointed Ryan Mason and Chris Powell to take over from Jose Mourinho after sacking the manager on Monday, according to the Telegraph.

Mourinho has paid the price for a dire spell in north London, with Spurs facing the prospect of missing out on European football for next season.

Tottenham face Manchester City in the Carabao Cup final this weekend, and it had been initially reported that Spurs chief Daniel Levy had decided to wait until the end of the season before making a final decision.

But now, it has been widely reported that the axe has fallen on the two-time Champions League winning coach.

And former player Mason is set to take over alongside Chris Powell in a joint-manager role.

Mason retired from football in 2018 after suffering a fractured skull during a game in 2017.

The 29-year-old joined the coaching staff at Spurs after his retirement, but this is his first foray into first-team management.

Alongside him will be Powell, reports suggest.

The former Huddersfield Town and Charlton Athletic boss has been with the club's academy alongside Mason, having been appointed as head of coaching for the academy side.

They have initially been appointed until the end of the season, with rumours swirling about a possible move for RB Leipzig's Julien Naglesmann.

Tottenham officials were reportedly left incensed by Mourinho blaming his players after poor defeats, and The Athletic claims there was a very clear worry that once fans returned to stadiums, the mood around the club would be bleak.

Spurs were desperate to return to the Champions League next season, and a top-four finish was believed to be the only thing that could save Mourinho's job.

However, despite being just five points from a Champions League berth, they've decided enough is enough.

Mourinho's last game as Spurs manager was a 2-2 draw with Everton on Friday night.