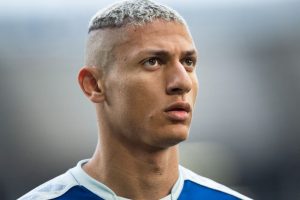 Tottenham Hotspur are now favourites to sign Everton forward Richarlison, according to reports. The north London side are considered the team ‘most willing’ to buy the Brazilian but could be put off by his hefty price tag of over £50 million.

Richarlison was Everton’s most important player last season, particularly during the Premier League run in, as the Toffees managed to stave off relegation. The striker scored 10 times in 29 Premier League games, crucially including six goals in his last nine matches. The Brazilian international is attracting interest from across Europe and is keen to challenge himself at a higher level than the Merseysiders.

Now The Athletic are reporting that Spurs could currently be in pole position given their ‘willingness’ to work on a deal. However they are just one of ‘several’ interested parties which include teams from England and the continent. They are thought to include Barcelona and Paris Saint-Germain, who have both tracked his progress in recent years. Real Madrid boss Carlo Ancelotti is also said to be an admirer of the forward after managing him at Everton last season.

The Goodison Park side are in no rush to make a decision and their valuation for the player ‘comfortably exceeds’ £50 million. Therefore, it is unlikely that the Brazilian moves on unless Everton lower their asking price or a buying club pay significantly more than they would like to. The situation is therefore likely to drag on over the summer.

For his part, Richarlison looks as if he is ready to move on. The forward now believes he can play in the Champions League for a top-club. This tallies with what the 36-times capped international said on leaving the club last month.

“I’ve already made it clear to the board, I’ve already talked to Frank Lampard too, with my agents and they know what I want,” Richarlison explained. “Let’s wait for June.”

Despite this, the player was keen to highlight his love for Everton and his support from the fans which made it more difficult for him to consider leaving.

Everton fans will be desperate to keep a hold of their star player despite his ambition to look elsewhere. Any potential transfer away from the club looks destined to become one of the most discussed stories of the summer.