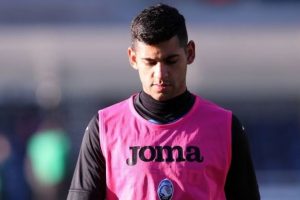 Cristian Romero is set to tell Atalanta manager Gian Piero Gasperini that he ‘will do anything’ to complete his move to Tottenham when the pair sit down tomorrow, according to reports in Italy. The 23-year-old centre-back is now growing impatient over his potential switch to north London and he wants the situation resolved as soon as possible.

Romero has already given Tottenham the green light following discussions with the club.

They are set to offer him a five-year contract and personal terms have already been agreed.

There have been conflicting reports in regards to Tottenham’s pursuit of the player in the past 24 hours.

TyC Sports and talkSPORT claim Spurs have now reached an agreement with Atalanta for an initial £43million.

Yet Sky Italia say differently and suggest the Serie A club are yet to agree a sale.

They claim Romero is set to personally plead with Gasperini tomorrow when a meeting is planned to discuss the player’s future.

Atalanta are not expected to block the move and want to bring in Romero’s replacement before they sign off his exit.

Gasperini said: “Romero will be with us on Monday and I think player decision will be important to understand his future.

“Then we’ve to see how negotiations between clubs will develop.”

Atalanta have also completed the signing of a new centre-back in the form of Matteo Lovato.

The Atalanta boss is confident the youngster can step up and replace Romero, although the club are expected to sign another senior defender.

“He has already played three friendlies. If he replaces Romero, we’re fine,” he said.

Merih Demiral is believed to be high on the club’s shortlist with talks expected to begin with Juventus.

Tottenham also want to sign Tomiyasu and have made an offer for the Japanese international.

He is currently away at the Olympics and his future will be resolved on his return to Europe after the Games.