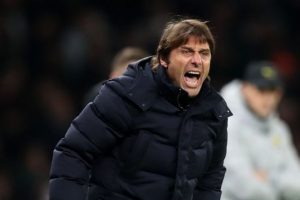 Some Tottenham Hotspur players are reportedly worried that Antonio Conte could quit as head coach as early as next month if he isn’t backed in the January transfer window. Many expected Conte to be assured signings when he replaced Nuno Espirito Santo in November, but Tottenham have so far been silent on the transfer front this month.

Conte is unbeaten in his eight Premier League games as Spurs boss but has seen his side knocked out of the Carabao Cup and Europa Conference League.

The Italian coach looks increasingly frustrated on the touchline and in interviews he hasn’t held back his honesty on the squad he inherited.

And according to football.london, some Tottenham players fear he could leave his role if he isn’t financially backed this month.

JUST IN: Three players who may never feature for Spurs again after Chelsea loss

Question marks surround a few areas of Conte’s squad, particularly with the quality in central midfield, and he held a ‘very honest and positive’ meeting with members of the Spurs hierarchy on Monday.

Daniel Levy and Fabio Paratici will understand what he wants, but most of Spurs’ activity this year is expected to take place in the summer.

Whether Conte feels the club is moving in the right direction based on that activity will likely decide whether his second stint in London is a success.

Ahead of Tottenham’s Carabao Cup exit on Wednesday, Conte suggested he has given the club transfer advice, but the final decision is ultimately down to Levy and Paratici.

He said: “I spoke with the club and I had my thoughts about the situation and this is the most important thing.

“Then the club has to decide the best way to go. I don’t have expectations. I am a coach, and I know that we have to solve many problems.

“For me, the most important thing was to speak to the club. I did this, and now the club has to decide what we have to do.

“We’ll see the decision of the club if we want to improve in other aspects or not. If there’s the possibility or not.

“It was a good meeting. A good meeting because the owner and Paratici, they started together this season from the start. I arrived in the middle of the season, and for sure, they know the situation much better than me.

“A good meeting, a good meeting to speak and tell them my thoughts about after two months I spent in Tottenham. It’s OK.

“Now I am working in the present. I can give this, and then the decisions are for the club, not for me because the last word is always for the club.”