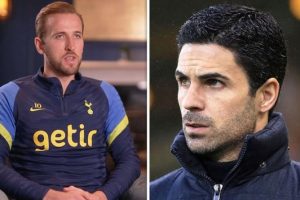 Arteta discusses the team spirit at Arsenal after Liverpool draw

Tottenham striker Harry Kane insists Arsenal are a “great side” who are now back to competing at a “high level”. Tottenham and Arsenal are set to go head-to-head on Sunday afternoon if the Premier League reject the Gunners’ request to have the match postponed. Mikel Arteta’s side believe they do not have enough available first-team players to play the match.

Arsenal currently sit fifth in the table, two points ahead of Spurs in fifth.

However, Antonio Conte’s side have two games in hand over Sunday’s visitors in the quest for Champions League qualification.

No player has scored more goals in north London derbies than Kane.

Spurs have finished above their rivals every season since the 2016/17 campaign after ending a 22-year spell where they were below Arsenal.

Kane admits he and Tottenham have had plenty of success in recent years against Arsenal, especially at home.

But he can see big improvements at the Emirates under Arteta.

Kane told Sky Sports: “Before I kind of broke into the team, our history wasn’t great against Arsenal in terms of playing against them, obviously finishing above them in the league.

“But look, Arsenal are a great side, they have kind of been building over the last couple of years I feel and now they’re starting to reach a high level.

“So fully expecting a tough game on the weekend but it’s nice to have a real good battle on our hands.”

If Sunday’s match does go ahead, Kane knows there is more than just bragging rights on the line at the Tottenham Hotspur Stadium.

“Arsenal are above us at the moment, we have a couple of games in hand,” he added.

“It’s a real important momentum shift, this game on Sunday.

“If we can win and get even closer to them with the games in hand that we have, it will put us in a really good place.

“Massive game like you said for many reasons, it being a derby.