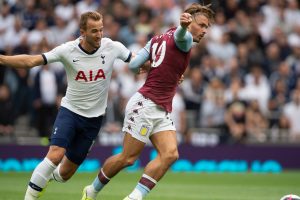 Harry Kane’s proposed Tottenham exit promises to be one of the biggest transfer sagas in recent memory, one that will demand Pep Guardiola exhaust his resources if he’s to land the striker.

That could include reuniting the England captain with international team-mate Jack Grealish, who is also understand to be a target for Manchester City this summer.

The Citizens are reportedly weighing up a potential swap deal that could see Raheem Sterling and Gabriel Jesus join Tottenham, with Kane moving in the other direction.

Signing Aston Villa’s Grealish could be another way to convince Kane, who gushed about the player when he spoke to Gary Neville on Sky Sports’ The Overlap: “I love Jack, just love Jack as a player. Fantastic. From when he came in and I started training with Jack, we just had a real connection.

"He sees the game a lot how I see it in terms of how he passes, how he moves, always looking forward, always rapping balls in, trusting your team-mate to have the touch and be able to handle it.

"He’s a real player and one who’s going to be very special for the future.”

Villa captain Grealish, 25, signed a new five-year contract with his boyhood club in September 2020, though it’s been reported City could take advantage of a release clause in the deal.

Kane has another three years left to run on his own agreement with Spurs, casting doubt as to whether he’ll be allowed to leave north London this summer.

The 27-year-old has scored 221 goals in 336 appearances for Tottenham, leading chairman Daniel Levy to place a £200million valuation on his star striker.

Kane appeared to wave goodbye to his fans after Tottenham lost 2-1 to Grealish’s Villa in their final home game of the season.

England frontman Kane will be considered a shoo-in for Gareth Southgate’s England squad ahead of Euro 2020, which is set to be confirmed later on Tuesday.

Grealish—who has earned five caps since making his Three Lions debut in September—is less certain to make the cut.

Guardiola is targeting improvements at the Etihad Stadium this summer despite winning a domestic double with the Premier League and League Cup titles.

The Citizens were clear favourites to finally add the Champions League crown to their cabinet but lost 1-0 to Chelsea in their final debut on Saturday.