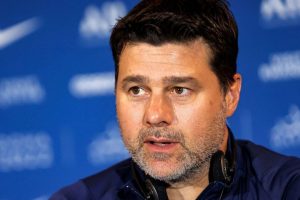 Tottenham have reportedly already started talks to bring Mauricio Pochettino back to London with Antonio Conte looking increasingly unlikely to stay beyond the end of the season. The Italian is said to have irked Spurs chiefs by using his press conferences to air his grievances about the club, and their poor form in the Premier League is an increasing concern for both the board and supporters.

Conte’s tenure as Tottenham boss has soured in recent months despite leading the side to their best-ever start in the Premier League after 10 games. Results have dried up in the matches since, with just three wins in the 10 that have followed. The poor run of form has seen the north Londoners fall six points behind the top four, leaving the club facing a huge battle to secure Champions League football next season.

The Italian’s deal expires at the end of the campaign and it looks increasingly likely that it will not be renewed. Contract talks will not take place until the season has reached its conclusion with the expectation being Conte will move on with neither party really happy.

The Times states that in addition to the club’s poor form, Tottenham chiefs have been ‘less than impressed’ by Conte’s insistence on airing his grievances in public via his press conferences. As a result, it is even more likely that he will depart in six months’ time.

It also appears that the Lilywhites may already have settled on his replacement too, with Tutto Mercato Web reporting that talks have begun over a sensational return for Pochettino. The Argentine was loved by fans during a five-year stint in the hot seat between 2014 and 2019 and the club have now started working on bringing him back.

For his part, Pochettino has confirmed that he would be interested in a return to England having also enjoyed a successful stint with Southampton.

“I miss the Premier League,” he told talkSPORT during the World Cup. “Why not (return to manage in England)? We are open. I love England, I love living in London. It’s like my house and home. I love being in England.

“I think the Premier League is one of the best if not the best league in the world because it’s so competitive. Of course, if that possibility (to return) appears for sure we will consider taking it.”

It remains to be seen whether or not Pochettino will return to Tottenham but it looks increasingly certain that the club will be under new tutelage next season with Conte likely to bid farewell.