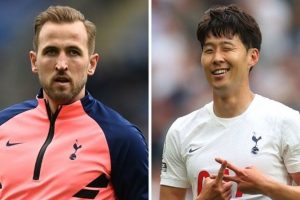 Son Heung-min stepped up when his team needed him most with a brilliant strike against Manchester City, leading to some Spurs fans airing their views on Harry Kane’s transfer drama. Kane was absent from the Tottenham squad to face City, with Nuno Espirito Santo insisting the striker isn’t fit enough.

“He is continuing his preparation,” Nuno told Sky Sports.

“Harry needs to work, he worked today and he will keep on working until he is ready to help the team. Players who have had not many sessions need more work with us, need to be fit.

“It’s a different case with Bryan [Gil] who came from the Olympic games. Also for [Cristian] Romero.”

But Kane’s absence only added speculation over Tottenham’s possible future without their main talisman.

JUST IN: Kane left out of Spurs squad with reason for Man City absence provided

Nuno was forced to utilise Son as the main striker, flanked by Steven Bergwijn and Lucas Moura.

It’s not new for Son to be moved more centrally when Kane has been unavailable.

But the transfer uncertainty surrounding Kane’s future with City showing the biggest interest has added further doubt on whether Espirito Santo will have to cope without him on a permanent basis.

Facing off against the defending Premier League champions, there were a few Spurs fans worried about an opening-day defeat.

Nuno’s side kept City at bay in the first 45 minutes though and were well matched against Pep Guardiola’s side.

Son, Bergwijn and Moura were also causing the City defence a number of problems.

And Spurs found the breakthrough midway through the second half after an individual piece of excellence from Son.

The South Korea international picked up the ball on the edge of the box, dinked past Nathan Ake before letting a long-rage effort fly.

Ruben Dias misread the flight of the ball and was unable to block the strike, leaving Ederson with little time to react.

Son has long proven to be Tottenham’s saviour in their hour of need and many Spurs supporters believe his goal against City was further proof that he is in fact more important to the club than Kane.

A third posted: “Kane was holding Son back sadly.”

A fourth wrote: “Son is better than Kane. Change my mind.”