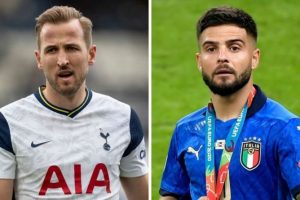 Tottenham have been given a boost in their pursuit of Lorenzo Insigne which could affect Harry Kane’s future at the club. Nuno Espirito Santo is entering his third week as Tottenham boss with little activity in the summer transfer window as of yet.

The former Wolves boss spoke openly about transfers in his first press conference at the end of last week, admitting that new signings are needed.

“Anything can happen in football, it happens so fast,” he said. “This transfer window has been different because of the Euros, because of the struggles of the pandemic, all these things have delayed things.

But arguably Espirito Santo’s biggest task in the next few weeks will be trying to convince Kane to remain at the club.

The England captain made it clear two months ago that he was looking to leave Tottenham, sparking interest from Europe’s elite clubs.

Daniel Levy has stood firm in demanding no less than £150million from interested clubs, with no such bid forthcoming so far.

Kane is due to meet up with the Tottenham squad for pre season training soon, but there have been reports suggesting that he could refusre to return in order to force through an exit.

Helping to convince Kane that Tottenham remains his best options may well lead Spurs into the transfer market.

And signing world class players will certainly help Tottenham’s cause with Kane desperate to challenge for trophies.

Gareth Bale’s departure leaves a gaping hole in the attacking positions and Insigne has emerged as a top target for Spurs.

The Napoli forward helped lead Italy to glory at Euro 2020, scoring twice in wins over Turkey and Belgium.

He has just one year remaining on his contract though and Corriere dello Sport now claim that Insigne could be available for just £26m this summer.

Napoli are reportedly keen to balance their books before the start of next season, with a host of their top players being made available.

Insigne is supposedly keen to stay at Napoli, but he wants a bumper pay rise before agreeing new terms.

That could open the door for Tottenham to swoop in for the 30-year-old, who has terrorised defences throughout his career.

He was on top form last season for Napoli, scoring 19 goals and providing seven assists in Serie A.

And signing a player like Insigne may well be the key to convincing Kane to stay in north London for the upcoming campaign.