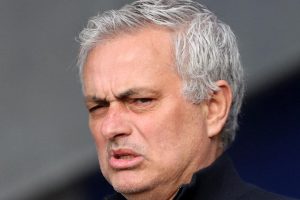 After Tottenham were revealed as one of the six EPL teams looking to join the rebel Super League competition, Mourinho has been fired by his side after a 2-all draw with Everton.

Tottenham are currently seventh in the Premier League and have parted ways with the seasoned coach after bringing him in to take the club to the next level.

The side finished sixth in the EPL last year, appear unlikely to make Champions League next year and are already out of the Europa League.

But the side is scheduled to play the Carabao Cup final on Sunday against Manchester City, with the match appearing like the only way Tottenham will taste silverware this season.

Originally contracted to 2023, Spurs tweeted a statement that said: “The Club can today announce that Jose Mourinho and his coaching staff Joao Sacramento, Nuno Santos, Carlos Lalin and Giovanni Cerra have been relieved of their duties.”

Sports journalist Paul Brown said that it appeared that Tottenham had tried to bury the news behind the announcement of the Super League.

“#THFC may think this is a good day to try and bury bad news. But it’s hard not to see a link between this and the big story in football. Could anyone really see #Mourinho leading Spurs into a #SuperLeague?” he tweeted.

The Super League was revealed to be a 20-team competition that would uppend the football world and even potentially see some of the world’s biggest clubs axed from their compeititons with players banned from playing international football.

It was announced as a midweek compeition, with another three clubs to join the 12 and never face relegation, while five more clubs would be added on a rotating basis.

Joel Glazer, co-chairman of Manchester United and vice-chairman of the Super League, said the news would help the world game.

“By bringing together the world’s greatest clubs and players to play each other throughout the season, the Super League will open a new chapter for European football, ensuring world-class competition and facilities, and increased financial support for the wider football pyramid,” he said.

Mourinho appears to be the first casualty of the European Super League.Source:Getty Images

But the wider football world has unloaded.

UEFA described it as “a cynical project, a project that is founded on the self-interest of a few clubs”.

Manchester United legend Gary Neville delivered the most scathing take as he took aim at Man U and Liverpool in particular.

“I’m a Manchester United fan and have been for 40 years of my life but I’m disgusted, absolutely disgusted,” he said.

“I’m disgusted with Manchester United and Liverpool the most. Liverpool, they pretend – ‘You’ll Never Walk Alone, (they’re) the people’s club, the fans’ club’.

“Manchester United, 100 years, borne out of workers from around here, and they’re breaking away into a league without competition that they can’t be relegated from? It’s an absolute disgrace.

“Honestly, we have to wrestle back the power in this country from the clubs at the top of this league — and that includes my club.”

Closer to home, Socceroos great Robbie Slater slammed the move in a column for NewsCorp.

“The proposal to form a breakaway league, stacked with the biggest clubs in Europe, just isn’t football: it’s horrible, shameful and doomed to fail,” he wrote.

“It’s a blatant cash-grab from the most powerful clubs in the world and is driven by nothing but greed – for money and power.

“And it’s about the rich getting richer – and stuff everyone else.”