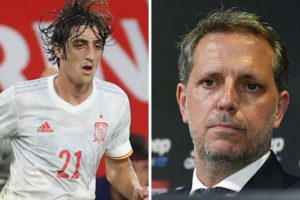 In pictures: Tottenham ease to win at Colchester

Tottenham have begun making moves in the transfer market with deals for Bryan Gil and Pierluigi Gollini agreed, but Fabio Paratici is continually working behind the scenes on more deals. The former Juventus chief officially started his new role on July 1 and has been tasked with making some big changes to Tottenham’s squad.

One of the biggest tasks he faces is trying to convince star striker and vice-captain Harry Kane to stay at the club.

The 27-year-old indicated back in May that he wanted to leave Spurs and is yet to return from his summer break.

In the meantime, Paratici has been looking at getting a number of deals tied up before the start of the season.

And he’s already made his first moves with a deal in place to sign Gil from Sevilla, while Gollini is set to arrive on an initial loan from Atalanta.

Erik Lamela will head to Sevilla as part of the Gil transfer with Tottenham also splashing out £21.6million for the highly-rated Spaniard.

Gollini had been pushed down the pecking order at Atalanta and comes in as back-up to Hugo Lloris.

But Tottenham’s transfer activity hasn’t stopped there with signing at least one centre-back seen as a top priority.

And The Athletic report that Paratici has been in contact with five clubs as he gets to work on his shortlist.

Jules Kounde has been at the top of Tottenham’s wishlist this summer and it is claimed an agreement was in place with Sevilla, but the centre-back ultimately turned it down.

Spurs were hoping to use Davinson Sanchez in an exchange deal with Sevilla open to selling Kounde this summer.

But it is claimed the young French defender is holding out for a move to Real Madrid.

Cristian Romero is another player Tottenham are hoping to sign and is said to be Paratici’s ‘first-choice target’, however Atalanta’s asking price is proving too costly at £34.5m.

Talks have also reportedly been held with Lyon over a move for Joachim Andersen, who spent last season out on loan at Fulham.

Spurs have already made a £12.9m offer for Bologna’s Takehiro Tomiyasu and the two clubs are not too far away in negotiations.

And Southampton’s Jannik Vestergaard is another option Paratici is looking at, although it is suggested the Tottenham chief would prefer a younger defender coming in.