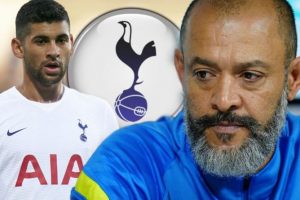 Tottenham boss Nuno Espirito Santo has urged supporters to remain patient with new signing Cristian Romero after Thursday evening’s defeat at the hands of Pacos de Ferreira in their Europa Conference League play-off first-leg clash. A much-changed Spurs team were surprisingly beaten under the lights in Portugal, with Lucas Silva’s goal shortly before half-time proving to be the difference between the two sides at the final whistle.

The likes of Dane Scarlett and Nile John were handed the opportunity to impress from the off by Nuno, while Bryan Gil and Romero were selected to make their competitive debuts for the club.

The latter struggled to get a foothold in the game and was largely responsible for Silva’s goal, with the Pacos de Ferreira man surging through far too easily to latch onto a through pass and fire the ball home.

Romero’s performance was not entirely impressive over the course of the 90 minutes, but Nuno issued a call for calm after the final whistle, insisting that his new defender will soon find his feet and prove to be a shrewd addition for the club.

“We need to be patient with all the players,” the Spurs boss told reporters.

“When a player changes country we need to realise we need to be patient. However, I think with the quality Romero has, his adaptation will be very fast.”

JUST IN: Chelsea ‘still trying’ to sign Kounde but Tuchel has two dilemmas

The result marked another embarrassing setback on the continent for Spurs, who crashed out of last season’s Europa League after spurning a two-goal advantage over Dinamo Zagreb at the round of 16 stage.

Nuno’s side were desperately poor in spells throughout the encounter and failed to register a single shot on target between the first whistle and the last.

Their continental exploits will be over for another year if they fail to beat Pacos de Ferreira in next week’s decisive second-leg clash at the Tottenham Hotspur Stadium.

Spurs will face Wolves on Sunday before they return to Europa Conference League action and Nuno is determined to gain some much-needed momentum against his former employers at Molineux.

“Nobody likes to lose a game or not play good,” he added. “The feel-good factor disappears. This is football.

“It is up and down but how you realise that this is the situation, they have to bounce back. This is what we are going to do.

“We are going to work tomorrow to prepare for the next one. The good part of football is that it gives you the chance immediately and we have a chance on Sunday.”