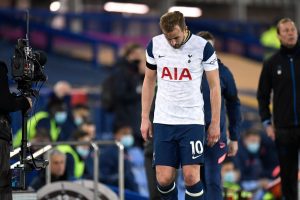 The England skipper, 27, is due to undergo a scan either later today or tomorrow on his swollen right foot after hobbling off near the end of Friday’s 2-2 draw at Everton.

Jose Mourinho’s men face Manchester City next Sunday in the Carabao Cup final – and are now sweating on whether their prolific hitman will be available.

Spurs boss Mourinho admitted yesterday that until the results of the scan are known it is impossible to say if Kane will be back in time for the Wembley showpiece.

Asked if there was any update, the Portuguese coach told the club's official website: “No, not really, it’s too early.

"Even Harry doesn’t know much, he just had that negative feeling that brought him out of the game.

"I believe probably Sunday is the day to have a different view and to try to anticipate what can happen next week.”

Kane has a history of ankle ligament trouble – and only recently missed a fortnight of the campaign after injuring both ankles in a 2-1 defeat at Liverpool.

But that rapid recovery – and the fact Kane left Everton without crutches or any cast on the leg – means there is cautious optimism the latest injury, following a collision with Everton striker Richarlison, might not rule him out next weekend.

With just 56 days to go before the start of the European Championships, England boss Gareth Southgate is also nervously waiting for more news.

Kane has been in sizzling form this year – for both club and country.

His double at Goodison Park made it 22 Premier League goals for the season, while he scored in each of England’s World Cup qualifying wins over Albania and Poland last month.