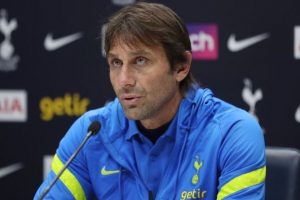 Tottenham manager Antonio Conte has given a subtle transfer message to chairman Daniel Levy, claiming that the club’s “incredible” fans “deserve much more” than the current predicament they find themselves in.

The Lilywhites currently lie sixth in the Premier League table, and can go to within just one point of second-placed Chelsea if they win the three games in hand they have over the Blues.

But whilst those points are not on the board, Conte cannot take that position as a given, with incomings clearly needed to boost the overall quality of the squad.

Having lost 3-0 on aggregate in the Carabao Cup semi-final to Thomas Tuchel’s men, with the 1-0 home defeat in the second leg taking place on Wednesday, Conte realises there is still much work to do despite remaining unbeaten in the Premier League since the start of his tenure.

And he has given chairman Levy a subtle hint urging him to spend big in January – claiming the people involved with the club “deserve so much more”, and he must “improve the situation”.

“I am enjoying my time at Tottenham,” Conte said ahead of their game against bitter rivals Arsenal at the weekend.

“I have found a fantastic atmosphere, a great stadium, a great training ground, our fans are incredible.

“For sure I want to improve the situation.

“The people deserve much more than this.”

Many doubted Conte for taking the Tottenham job back in November, with critics suggesting that his new role at Tottenham was much more of a step down than Inter Milan – who he won the Serie A title with last season.

Yet the Italian has stated that he feels comfortable at the club, and the club only have to work to improve the situation.

“I decided to accept this job because to work in this environment, to work in a modern club is good for every coach,” Conte continued.

“Then, as you know very well, I said this in the last press conference, when you’re outside you can imagine the situation.

“Then, when you’re inside the situation, you understand every aspect very well.

“Now, I repeat, it’s time to work. I made my evaluations about the situation. But now I think no words but facts. We have only to work to improve the situation that I’ve found here.”

The club are also supposedly open to offers for Dele Alli, Giovanni Lo Celso, Tanguy Ndombele, Japhet Tanganga and Matt Doherty in what can be billed as a ‘drastic rebuild’ of the club by Conte.

If the club’s current form remains intact, then Champions League qualification should be no qualm for Conte to achieve.

However, in order to keep the enigmatic Italian happy, money must be spent this window to strengthen a European charge.