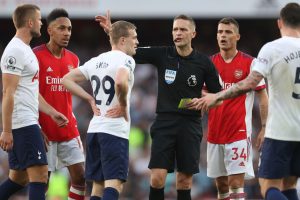 Tottenham have blasted both Arsenal and the Premier League in an angry statement about the postponement of their north London derby.

After the initial news broke that the Gunners had requested the match be called off on Friday, it was reported that Spurs were 'furious' about the situation.

The decision to postpone it was then confirmed on Saturday afternoon which has prompted that frustration to be packaged into a lengthy communication on their club website.

It read: "We regret to announce that Sunday’s north London derby against Arsenal has been postponed.

"This follows an application from Arsenal to the Premier League on the basis of a combination of COVID, existing and recent injuries and players on international duty at the Africa Cup of Nations. "We are extremely surprised that this application has been approved.

"We ourselves were disqualified from the European Conference League after a significant number of COVID cases meant we needed to reschedule a fixture and our application to move our Leicester fixture was not approved – only for it to be subsequently postponed when Leicester applied.

"The original intention of the guidance was to deal with player availability directly affected by COVID cases, resulting in depleted squads that when taken together with injuries would result in the club being unable to field a team.

Have Tottenham got a point? Let us know in the comments section. "We do not believe it was the intent to deal with player availability unrelated to COVID.

"We may now be seeing the unintended consequences of this rule. It is important to have clarity and consistency on the application of the rule.

"Yet again fans have seen their plans disrupted at unacceptably short notice.

"We shall once again send food deliveries to the local food banks to avoid unacceptable waste. "We are sincerely sorry for our fans – some of whom will have travelled great distances."

League rules state that matches must be played if a side has at least 14 players available, 13 outfield players and one goalkeeper.

But there are now increasing calls for greater clarity from club's on their respective situations.

Arsenal were without eight first-team players for their midweek clash with Liverpool in the Carabao Cup, but still played that match.