The Wembley surface is threadbare, looking weary and devoid of its usual lustre and Tottenham are not what they were either.

They, too, have lost a little the gloss which made them so pleasing on the eye. Perhaps, like their home from home, they are tired and overworked – and confused by all the debate about their true purpose in life.

This Champions League campaign has wheezed and spluttered from Milan to London to Eindhoven and back but finally Mauricio Pochettino’s team have won a game in Europe for the first time in 2018. 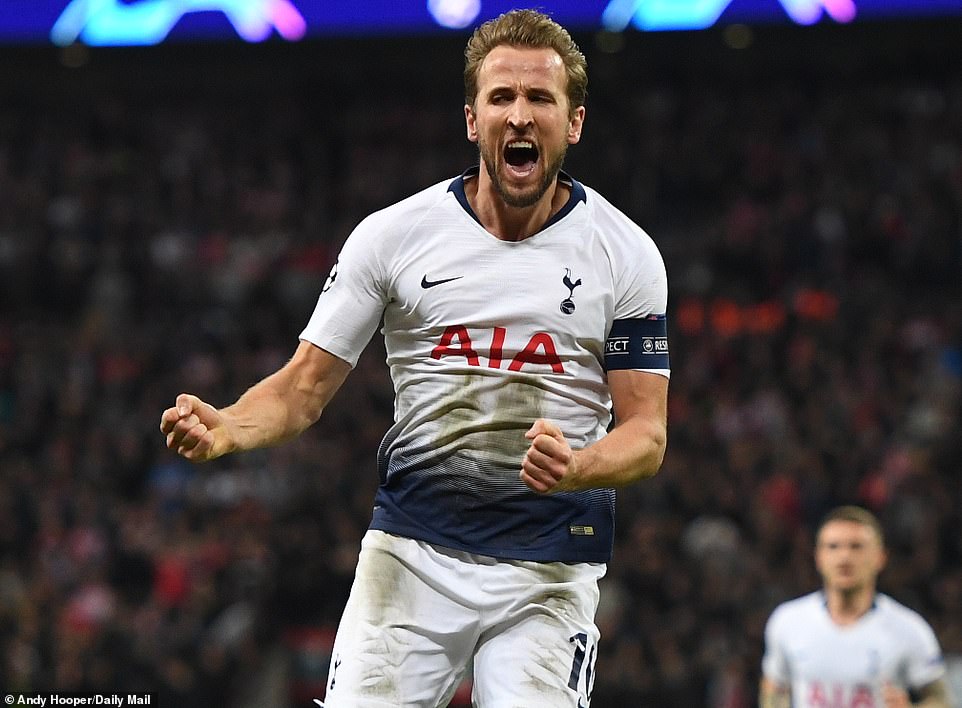 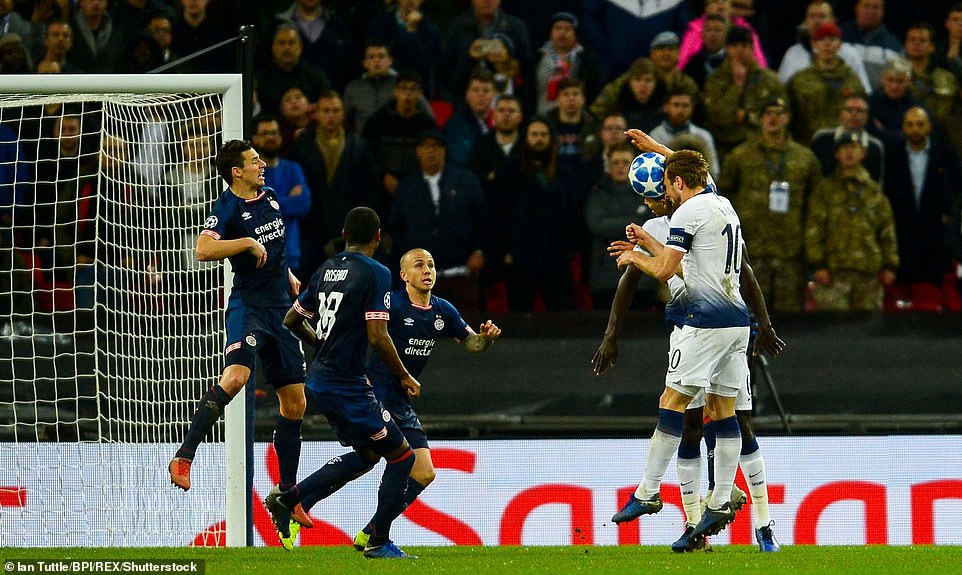 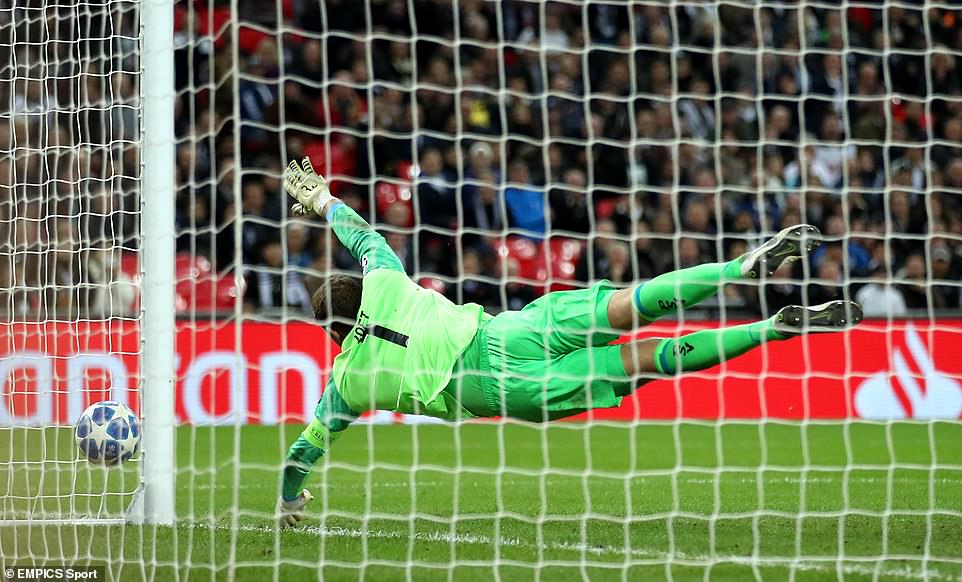 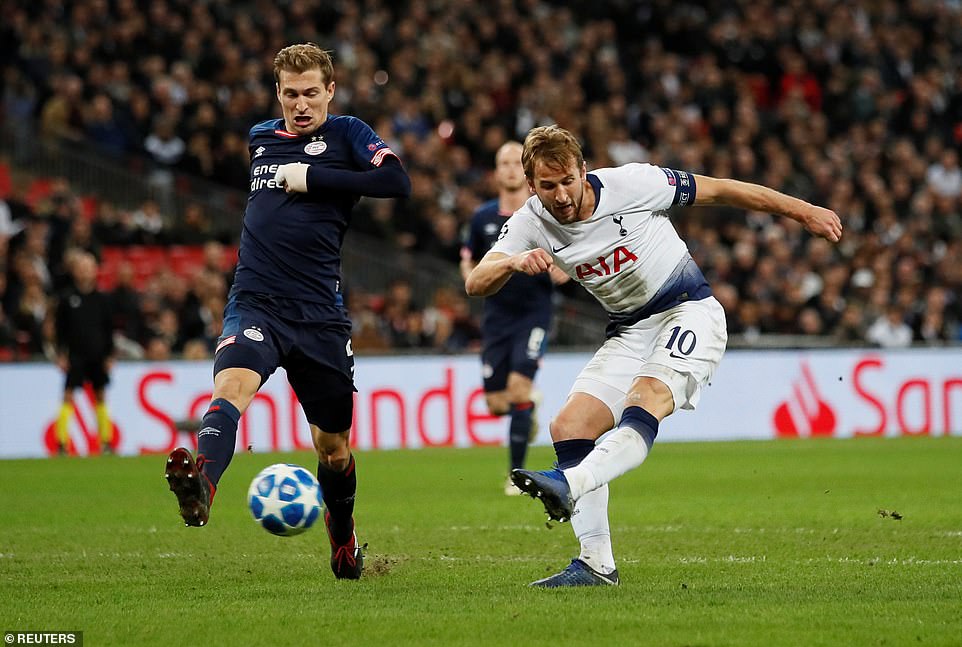 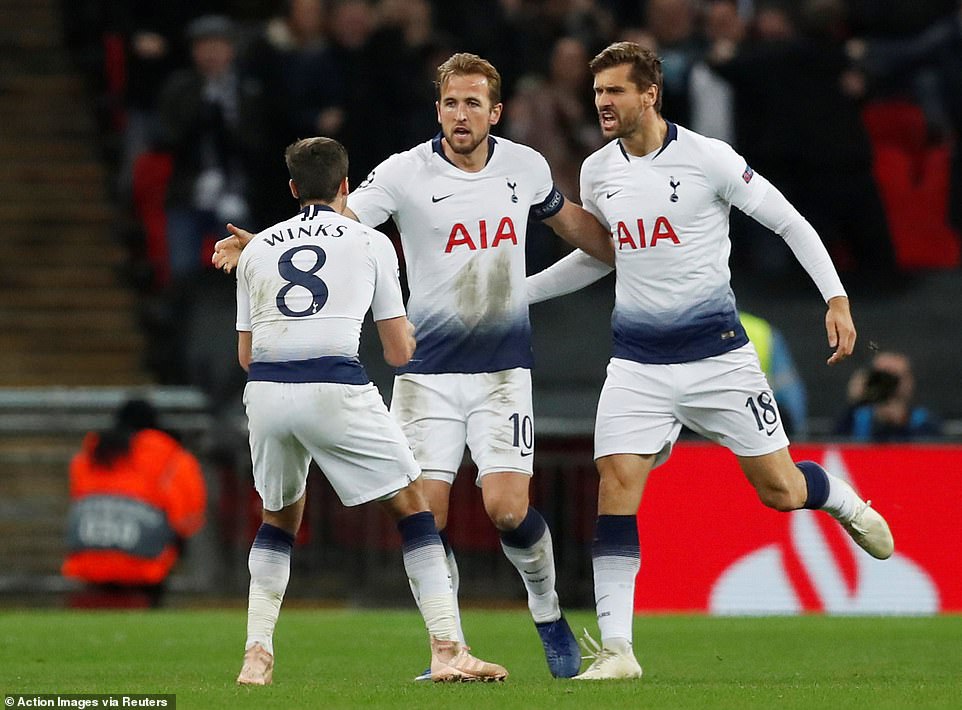 Albeit in a scruffy fashion – and thanks to two late goals by Harry Kane, the second of them in the 89th minute and courtesy of a heavy deflection.

This having gone behind after only 61 seconds to header by Luuk de Jong.

Spurs live to fight on in the Champions League – and Barcelona’s victory at Inter Milan boosted their slender and unlikely hopes of progress from Group B.

Perhaps Kane’s goals will trigger a miraculous escape, the sort of which they will regale for decades but it seems unlikely.

Still, the odds lean heavily towards an exit at the group stage and even in a difficult group this is eating away at the harmony which has been carefully nurtured by the manager.

As frustration grew and PSV resisted, on Tuesday night, Pochettino’s decision to take off Lucas Moura was jeered. 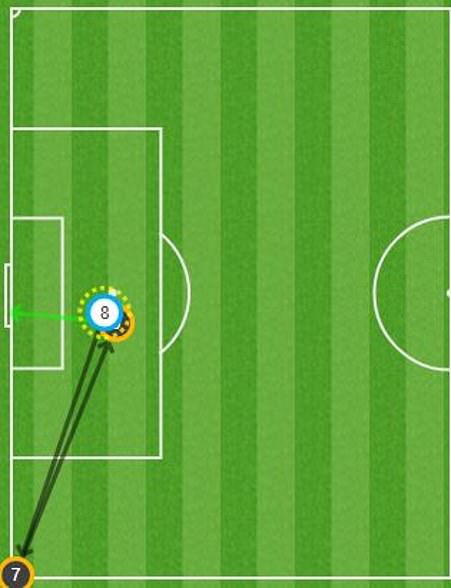 Luuk de Jong scored from a corner to give PSV the lead after just 62 seconds. Click here for more from out Matchzone feature. 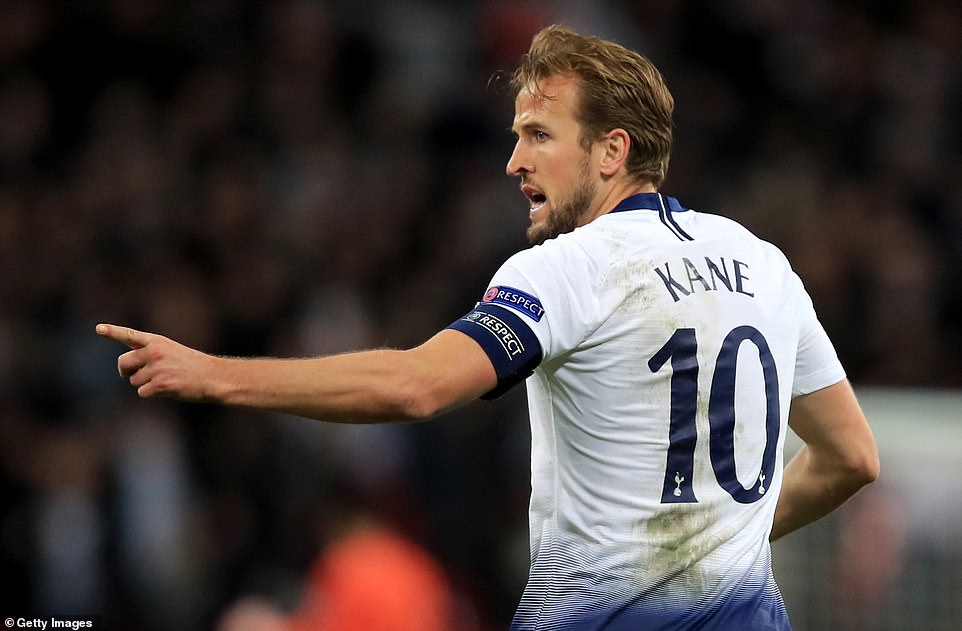 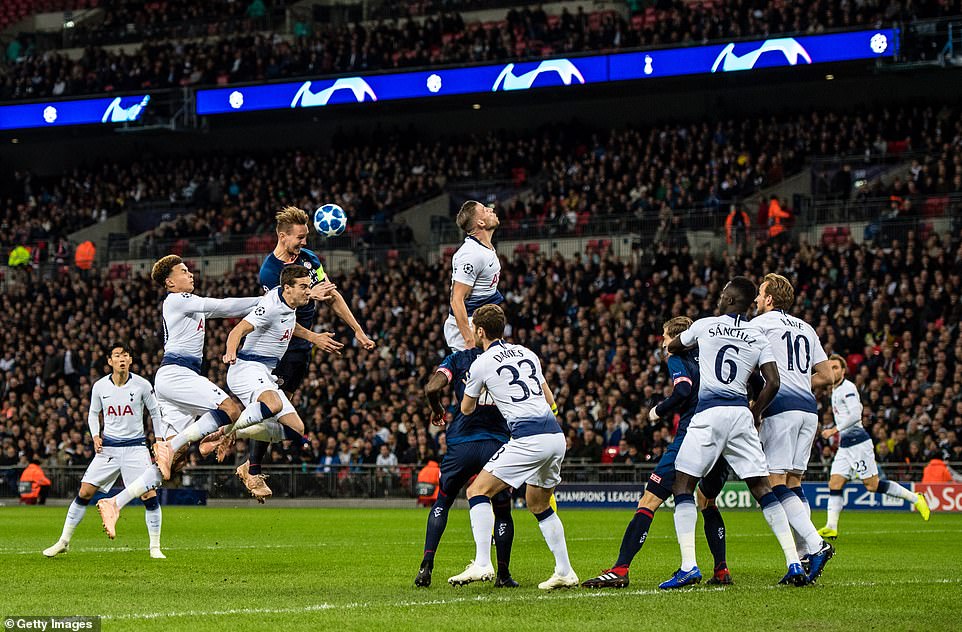 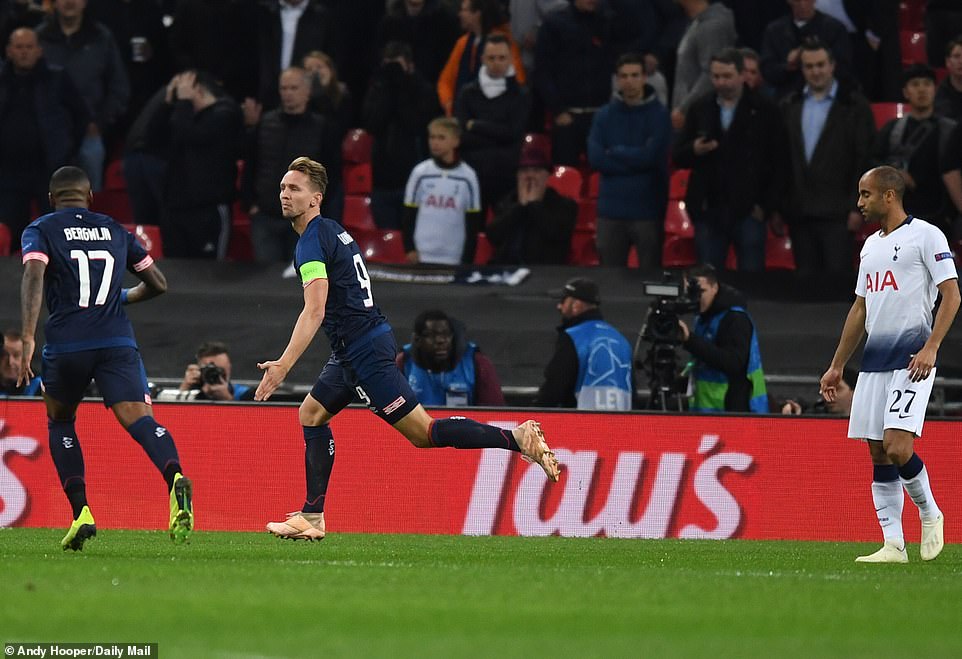 Moura’s jinking runs had caught the eye but the Brazilian was chosen to make way for Erik Lamela who helped produce the fightback.

This was forgotten by the final whistle course, as the Glory, Glory tunes rang around the stadium and the everyone breathed a collective sigh of relief.

This was Tottenham’s fourth outing in nine days and Pochettino made six changes to the team which won in Wolverhampton on Saturday.

There was no Hugo Lloris, who was serving a ban for the red card in Eindhoven. Paolo Gazzaniga won the battle to replace him and seems to have firmly overtaken Michel Vorm as the deputy to Lloris in the last few weeks.

Dele Alli was back in the team making his first appearance of the season in the Champions League and part of an adventurous formation which was at least partially forced on Pochettino by limited midfield options.

Gazzaniga’s first touch of the ball was to pick it out of his net in the second minute of the game.

PSV, the first Dutch club to play at Wembley since Ajax won the final here in 1971, were straight on the attack to force a corner.

Not for the first time this season, Spurs defended a set-piece feebly. 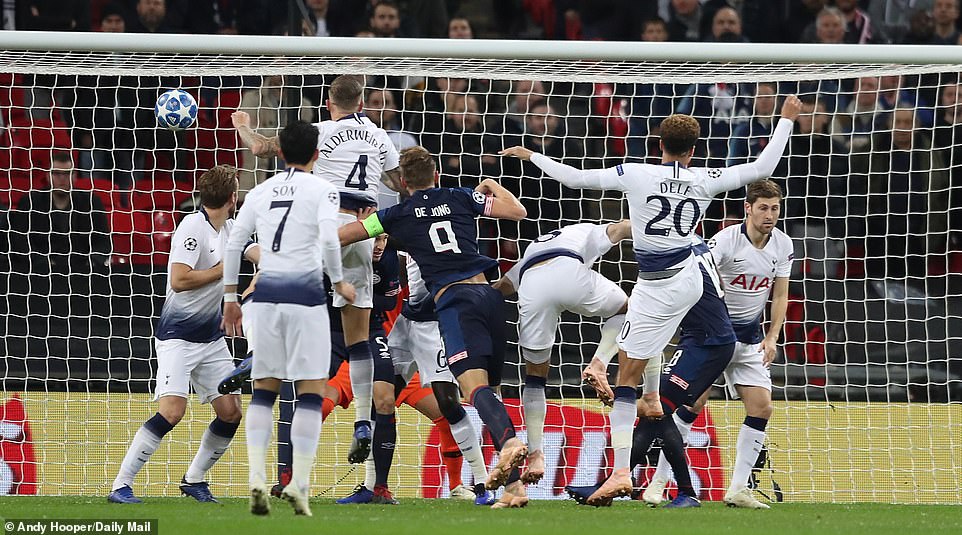 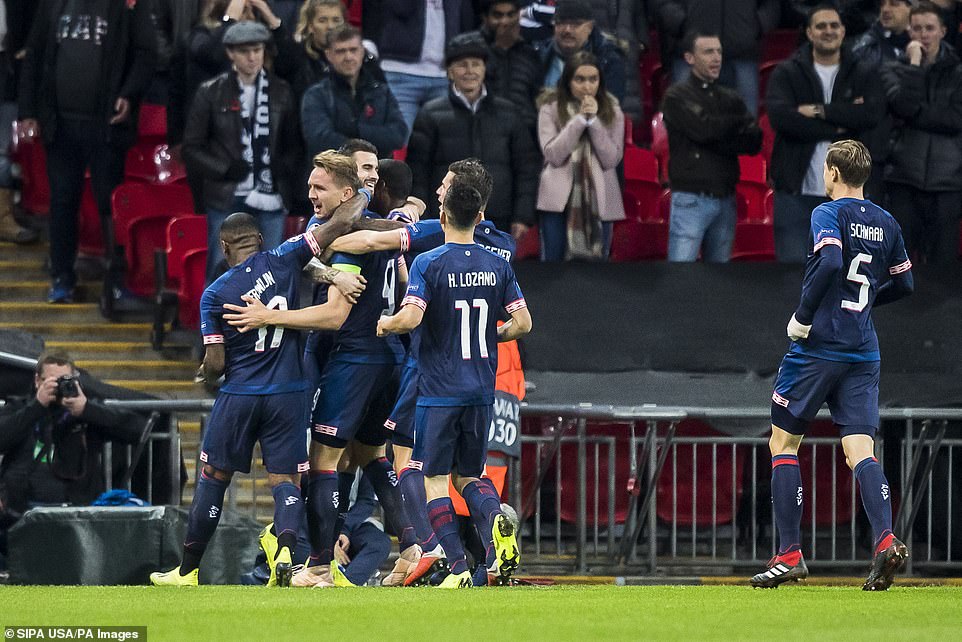 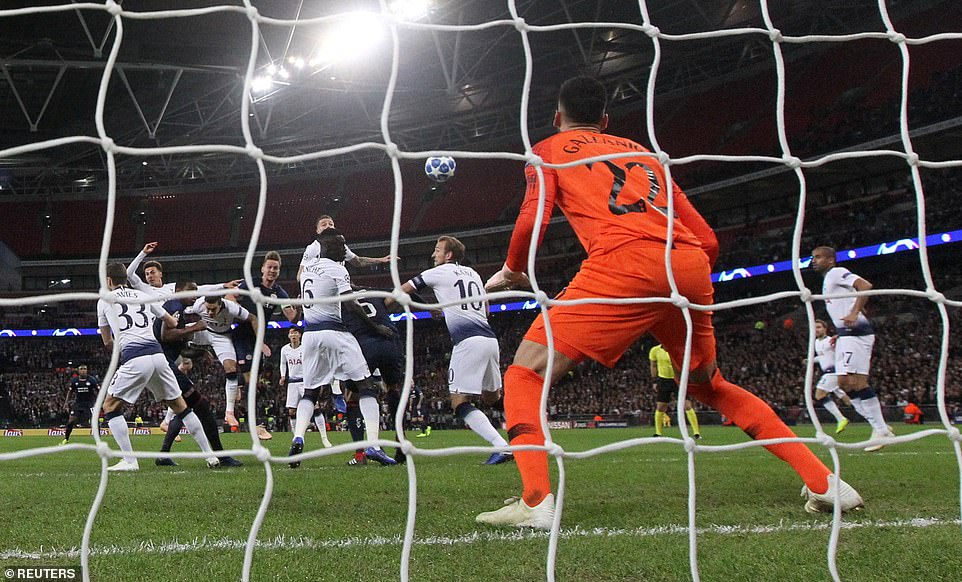 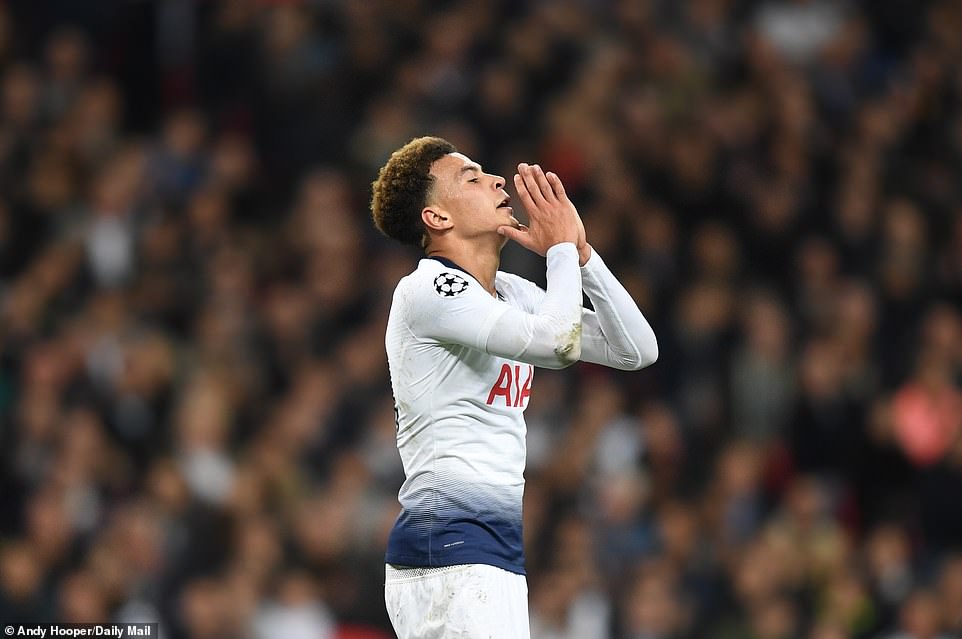 On the edge of the penalty area, Alli lost De Jong, attempting briefly to pull him back by the shirt before deciding to let him go.

His efforts to recover were foiled when he was blocked by Nick Viergever.

By the time De Jong, scorer of the late equaliser in Eindhoven two weeks ago, sprang to meet Gaston Pereiro’s corner kick he was all alone and easily able to a firm header which offered Gazzaniga no chance.

Amid all random issues swirling around Pochettino, such as delays to the new stadium, interest from Real Madrid and an absence of new signings, which he jokingly compared on the eve of the game to the Netflix drama House of Cards, there is this glaring footballing problem.

Nine of the 22 goals scored against his team have come from set-pieces and they have conceded eight headed goals.

As the Dutch champions and nearly 5,000 of their rowdy supporters celebrated the early De Jong strike, Pochettino tapped furiously at an iPad where the PSV set-piece routines would be stored. 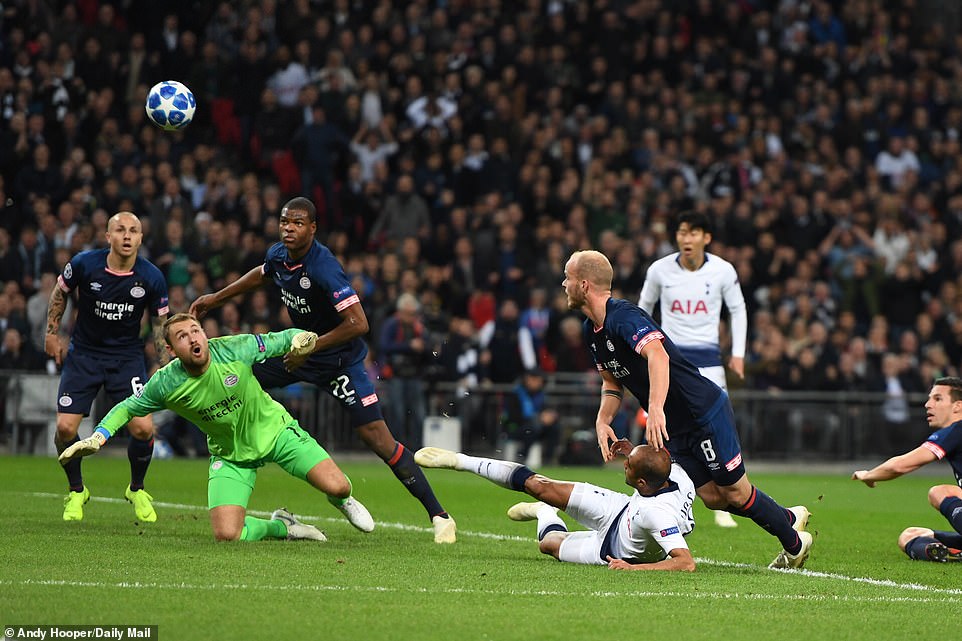 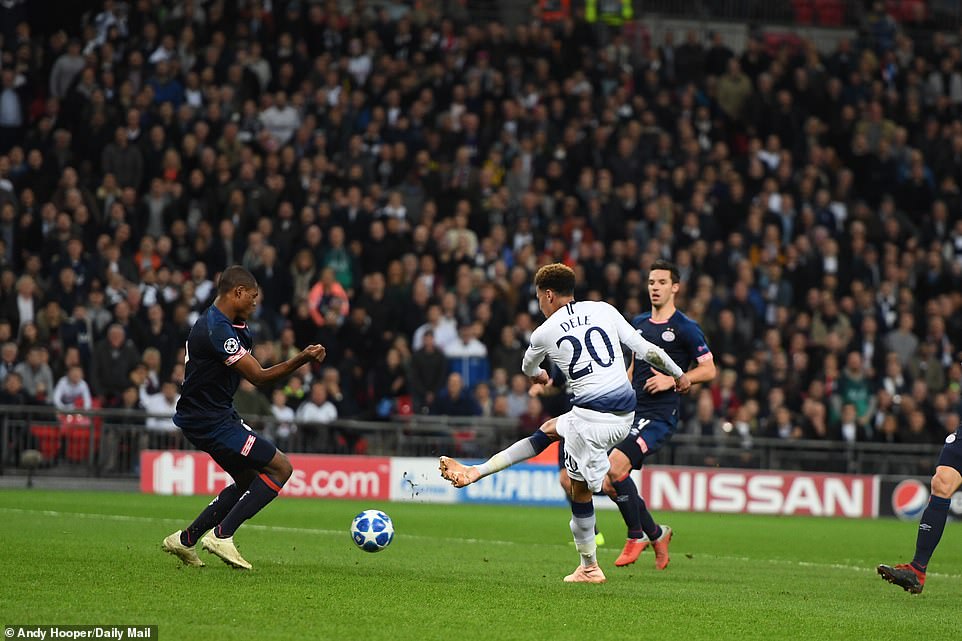 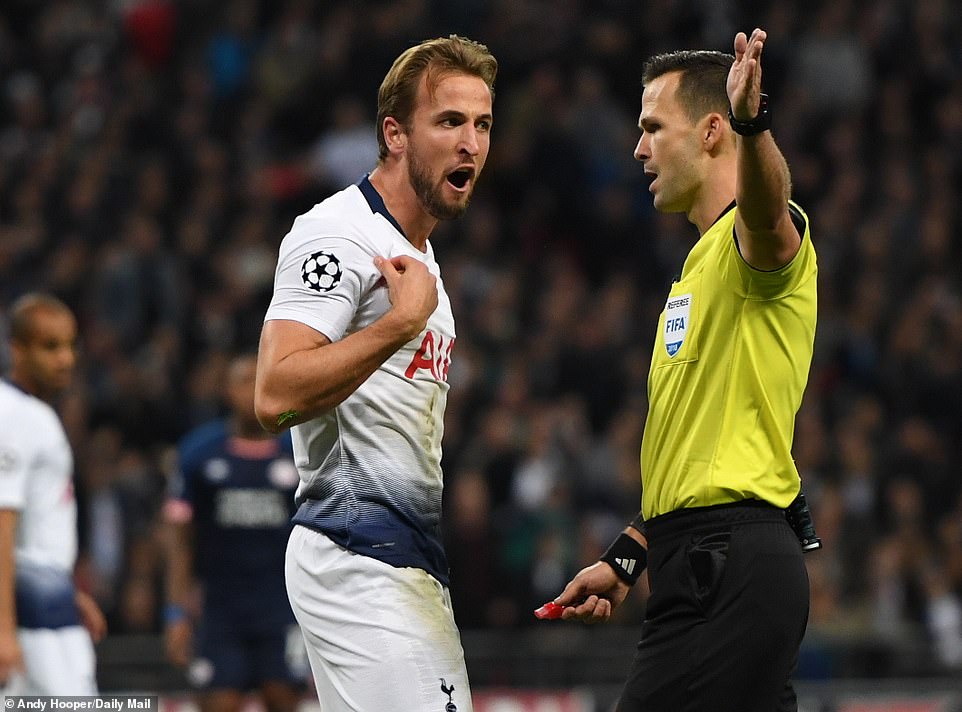 Christian Eriksen fired wide and full-back Angelino cleared from the goal line as Alli flicked with his heel at a header by Davinson Sanchez.

Kane forced Jeroen Zoet into a save and Lucas Moura dribbled deep into the PSV penalty area before he was smothered to a halt by blue shirts.

Zoet made a very impressive double block to deny first Eriksen and then Alli although both efforts might have been finished more clinically rather than fired into the body of the goalkeeper.

Anxiety had taken a grip. Spurs dominated possession and cut through the visitors and yet allowed desperation to interfere with their composure in front of goal.

A simple pass forward from Toby Alderweireld was enough to release Alli and a neat first touch brought the ball down but again he failed to connect sweetly with his finish and Zoet scrambled across to save. 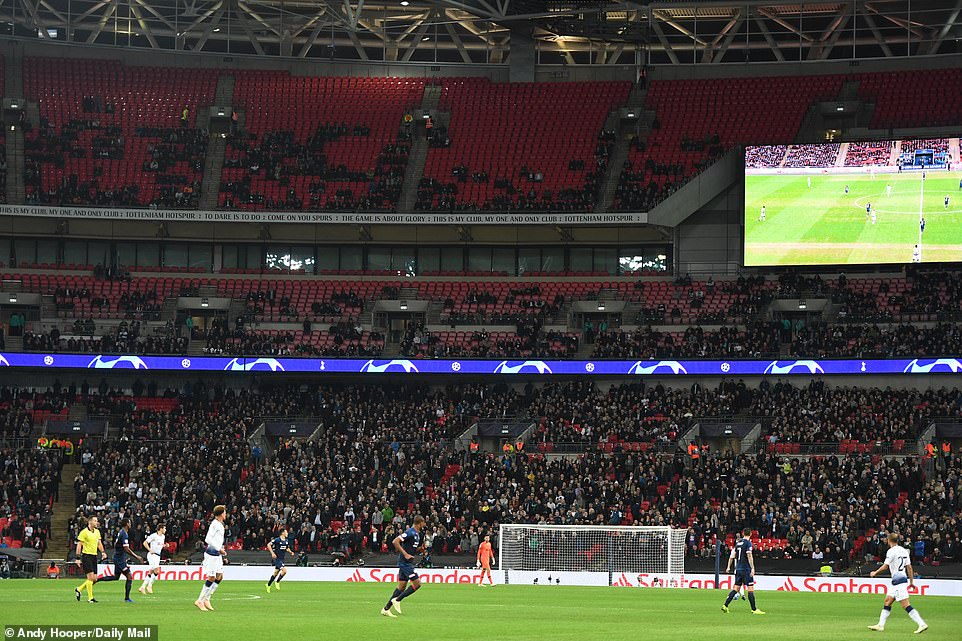 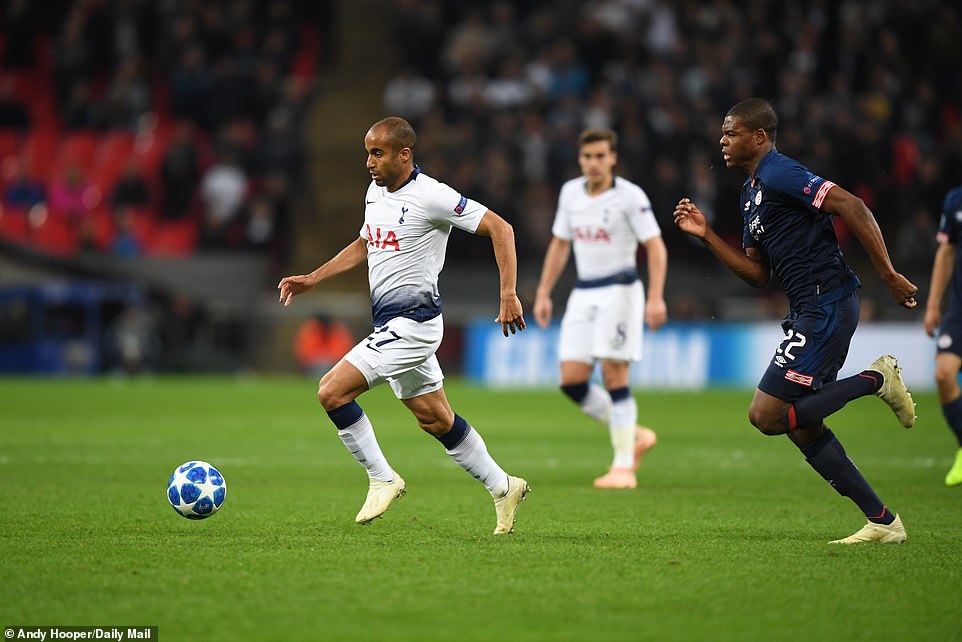 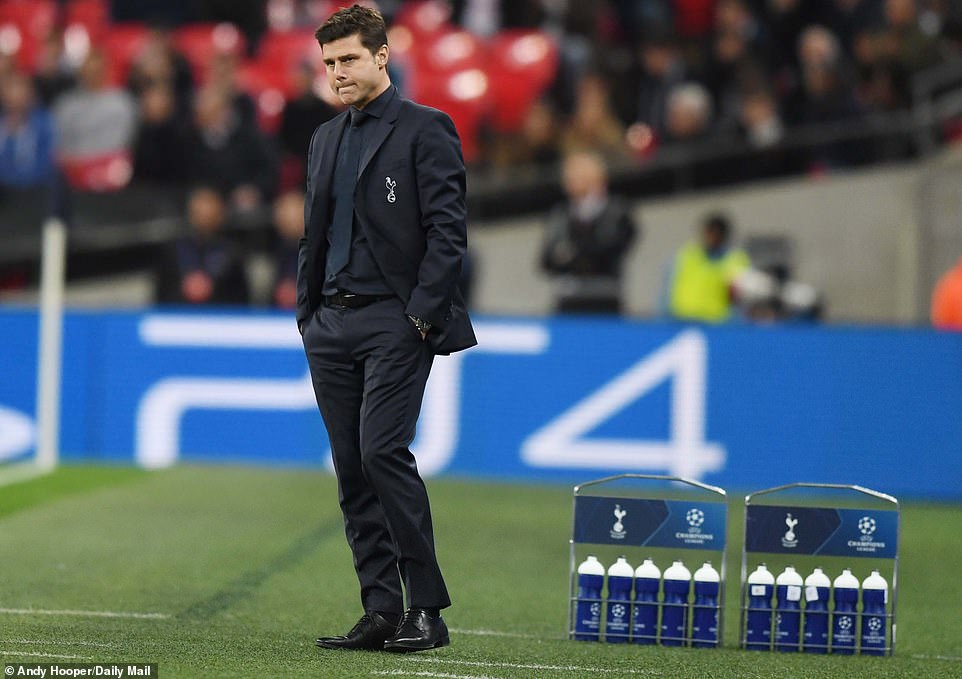 There was an appeal for a penalty when Heung-min Son tumbled in the area.

This were waved aside by the Slovakian referee and rightly so and PSV reached half-time with their slender lead intact.

Ben Davies and Alli missed the target from distance after the interval but Tottenham did not threaten Zoet’s goal as they did in the first half.

Moura was sacrificed to throw in-form Lamela into the fray. Fernando Llorente and Kieran Trippier followed from the bench and finally the Dutch resistance was broken.

Llorente played his part in the equaliser, setting up Kane to drive home with his left foot.

The winner was header from a cross by Ben Davies which took two deflections on its way past Zoet. 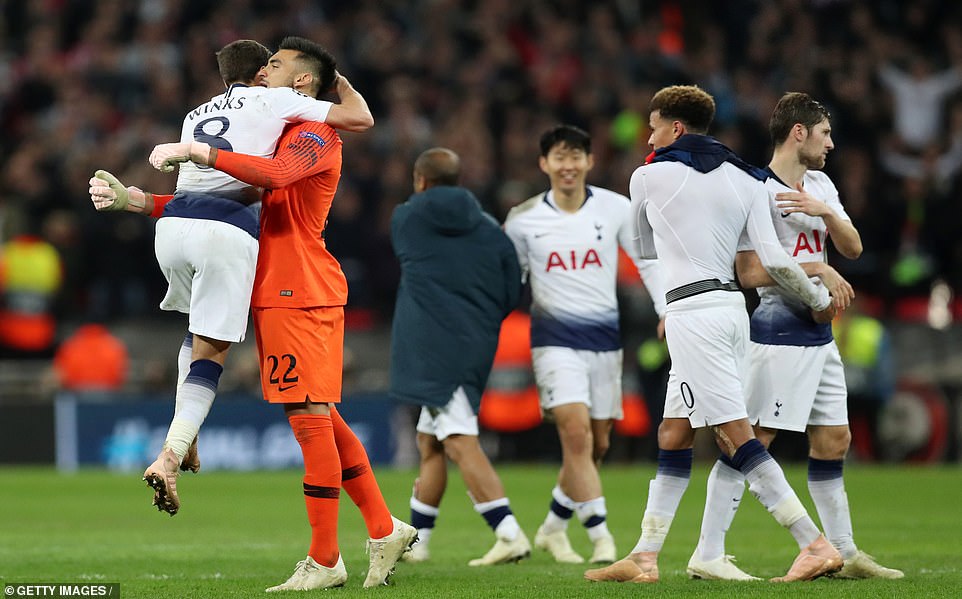 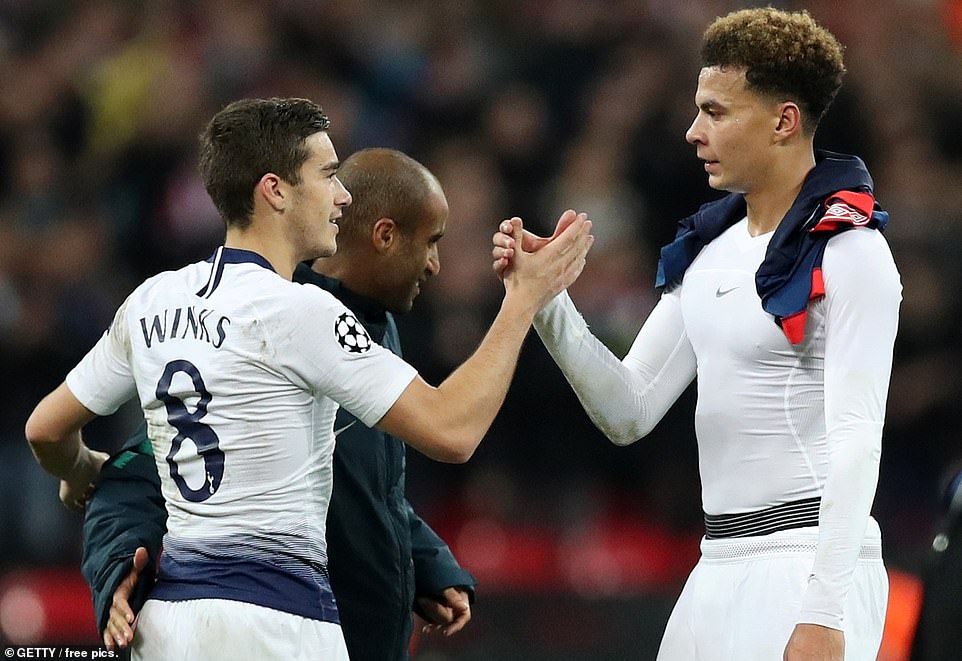 How will Indians, Reds recover after three-day MLB playoff nightmare?