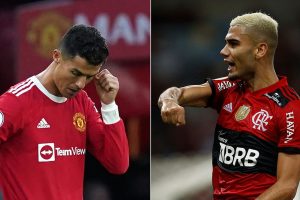 Manchester United's top scorer this season has been banging in the goals – but not for the Red Devils.

While United lurch from one disaster to another, Andreas Pereira is having a lovely time of it on loan at Flamengo in Brazil.

The Brazilian ace has bagged five goals in 16 appearances for the Side A side, including his first just three minutes into his debut.

Pereira, 25, got another one on the board this weekend with a superb acrobatic finish after arriving in the box at just the right time.

How United could do with his attacking instincts right now following a horror run of results that culminated in the sacking of Ole Gunnar Solskjaer on Sunday.

Indeed, his tally of five league goals is better than anyone at Old Trafford has managed this season.

Cristiano Ronaldo leads their scoring charts in the league with four goals, two of which came on his second debut against Newcastle in September.

Since then the Portuguese star has struggled to find the back of the net and has only one goal in his last seven Premier League games.

Bruno Fernandes and Mason Greenwood also have four goals to their name in the league, while Jesse Lingard and Marcus Rashford are on two apiece.

Should United hand Pereira a chance? Let us know your thoughts in the comments section below.

Edinson Cavani, Fred, Anthony Martial and Donny van de Beek complete United's bleak list of scorers with one each for the season.

Paul Pogba and Jadon Sancho, two of the clubs foremost attacking players, have not scored yet in the top-flight.

Despite his good form on loan at Flamengo, United fans may not get a chance to see Pereira in action again at Old Trafford.

That's because the Brazilian giants have the opportunity to make his move permanent for £17 million at the end of his loan period.

Transfer guru Fabrizio Romano corroborated those reports following the move and tweeted about an interesting clause United inserted into the deal.

He said: "Flamengo will not pay any loan fee but will share salary with Man United. Flamengo will have €20m buy option in 2022. Man Utd would receive 20% of future sale."