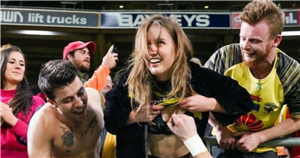 There’s nothing unique about a footballer being asked to sign a supporters’ memorabilia – but one fan in New Zealand wanted her own special memento from a game in the Australian A-League this weekend.

The unnamed woman held up a sign during Wellington Phoenix’s fixture with Western United asking star man Oli Sail to “Sign our t***.”

Sail, a goalkeeper who has kept three clean sheets in his last four A-League matches, might have been expected to ignore the unusual request.

But not one to disappoint, the 25-year-old left the woman’s breasts anything but clean after grabbing a marker and scribbling his name just above her bra.

Fans on Twitter loved it, with one labelling the A-League the “Best league in the world. And I’m not even joking.” Another said: “I love this league.”

Wellington’s match at home to Western United was their first in front of home fans for 433 days with Covid-19 restrictions forcing The Phoenix to play their matches in Australia since the outbreak of the pandemic.

Thanks to the establishment of a travel corridor between Australia and New Zealand, 24,105 fans were welcomed back home to witness a comfortable 3-0 win for the hosts.

Our aforementioned supporter had a game she’ll never forget, but head coach Ufuk Talay, who played in Europe with Galatasaray, was keen to praise all of those who made the club’s homecoming such a special occasion.

“For us, it's been a long time coming – I think the boys showed a great performance to the crowd, there's a lot of belief in this squad and the support for us tonight was immense,” said Talay.

“We dominated the ball tonight, we had a lot of the ball and they tried to hit us in transition but I thought we were in total control of the game from start to finish.”

“We knew we were going to get great support tonight, that there was going to be a lot of fans out there”.