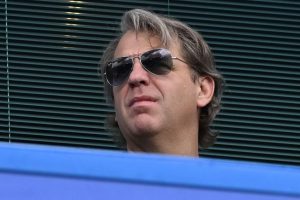 Roman Abramovich’s position over the sale of Chelsea remains ‘unchanged’

Todd Boehly is worried about some of the contract situations in Chelsea’s first team and will look to extend the deals of Mason Mount and Reece James when he is officially confirmed as the club’s new owner in the next few weeks, according to reports. The 46-year-old has agreed terms to purchase the Blues from Roman Abramovich for a fee of £4.25billion and was in attendance at Stamford Bridge to watch last year’s European champions in action against Wolves on Saturday.

Boehly recently emerged as Chelsea’s preferred bidder and his purchase is expected to go through over the coming weeks, subject to Premier League and UK government approval, after he signed a contract to buy the club on Friday. The American billionaire, who is also a part-owner of the Los Angeles Dodgers and founder of Eldridge Industries, went on to celebrate the next day by taking to the stands at Stamford Bridge to see his new club face off against Wolves.

It seems as though Boehly is already planning his first steps at Chelsea in order to make a productive start to his spell as their new custodian over the next few months. He is ‘concerned’ by some of the contract situations at the club and will move quickly to tie down Mount and James when his takeover is officially rubber-stamped in the near future, according to Goal.

It is claimed that Boehly is looking to renew a number of first-team contracts as a matter of urgency and will start by opening talks with Mount and James in order to provide them with salaries that reflect their importance to the club. The new Blues owner is said to have been left worried by the situations involving Antonio Rudiger and Andreas Christensen, who are both set to leave west London upon the expiry of their deals at the end of the season.

Boehly and his new ownership group have also reportedly decided to assess the future of Romelu Lukaku at Chelsea after the Belgian forward’s lacklustre campaign since returning for a club-record fee in last summer’s transfer window. Lukaku remains tied down until 2026 but is said to be open to the idea of leaving the club in the not-too-distant future and has been linked with a sensational move back to Inter Milan over the last few weeks.

It remains to be seen how Boehly will approach the task at hand at Chelsea over the coming weeks and months, with the Dodgers supremo unlikely to run the club in the ruthless manner that Abramovich did throughout his 19-year spell in charge. The Blues released an official statement on Friday evening to confirm that Boehly is poised to officially become their new owner by the start of next month, with all funds received from the purchase set to be transferred into a frozen UK bank account before they are eventually distributed to charitable causes.

“In addition, the proposed new owners will commit £1.75bn in further investment for the benefit of the Club,” the statement read. “This includes investments in Stamford Bridge, the Academy, the Women’s Team and Kingsmeadow and continued funding for the Chelsea Foundation.

“The sale is expected to complete in late May subject to all necessary regulatory approvals. More details will be provided at that time.”

Want the latest Premier League news as we publish it on Express Sport? Join our Facebook group by clicking here