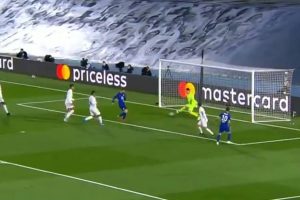 Timo Werner’s move to Chelsea has not gone as well as planned and the German missed another gilt-edged chance in the Champions League semi-final.

Werner has been a regular in the Blues line-up since his summer move from RB Leipzig though has missed a glut of chances this season.

Thomas Tuchel again named him up front for the first leg against Real Madrid with Werner offered a golden chance to open the scoring.

Werner was left unmarked inside the six yard box from Christian Pulisic’s header and many thought the ball would end up nestled in the net.

Though Werner’s effort lacked conviction, not taking anything away from the brilliant save made by former Chelsea goalkeeper Thibaut Courtois.

The Blues did take the lead moments later from Pulisic’s fine solo effort, though fans were still scratching their head as to how Werner missed.

Clinton Morrison said on BBC Radio 5 Live: “Timo Werner has to score! It is a great break from Mason Mount, Luka Modric can't get anywhere near him.

“Werner is only four yards out, and people can say it is a good save, but he should be burying it.

“He has gone with his side foot, which he should do, but he has to hit the corners.”

Werner has never lacked confidence this season despite his struggles in front of goal.

He scored the only goal of the game in a crucial Premier League win over West Ham at the weekend, though again missed another chance.

"I think the second chance I have to score, but I think I have to come back slowly," Werner said in a post-match interview following that clash with Sky Sports.

"One goal was enough and if I had scored twice today it might have been too much for the beginning!

"I'm joking, but I am very happy that we have won this game today and it is a very important win for us in the race for the top-four. Yes, I am very happy.

"The feeling is too short. I think when you have waited so long and you know that the feeling is very good. It is the best feeling you can ever have, to score a goal and win a game.

"It was really important for me and the whole team, but in the end I am just happy that I'm back on the scoresheet."