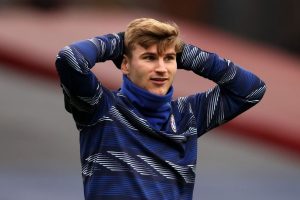 Time Werner can become a Chelsea legend by leading the Blues to European glory, according to former striker Chris Sutton.

The German forward has endured a tough time since his move to Stamford Bridge from RB Leipzig struggling in front of goal and even suffering a 14-game goal drought in the league over winter.

Though the 25-year-old has scored 11 goals this season, Chelsea will have expected more from a player who tallied 34 across all competitions in 2019/20.

However, former Blackburn and Norwich frontman Chris Sutton says that if Werner delivers European silverware this season, then all of his troubles will be forgotten.

“It’s been an indifferent season for Werner but guiding Chelsea to glory in Europe would earn him legend status,” Sutton told the Mail.

Chelsea face Real Madrid in the second leg of their Champions League semi-final tonight, having drawn 1-1 in Madrid.

The Blues go into the game with a valuable away goal, and Sutton, who lifted the Premier League alongside Alan Shearer at Blackburn, now thinks £47m Werner needs to sense the opportunity that knockout football brings.

He added: “Werner has proved himself to be a good team player but he has not been clinical enough in front of goal.

“We know that, and he knows that. But he has to sense the opportunity in front of him now.”

Christian Pulisic was on the scoresheet last weekend, but with Real Madrid captain Sergio Ramos likely to start, Chelsea will be faced with a tougher task to score.

Though Sutton was never the quickest player in his day, the pundit believes Werner will have to use his pace to trouble the returning Ramos when the sides face off tonight.

“It sounds like Sergio Ramos will return for Real — in what would be his first start for the club since March 16,” he said.

“When asked whether he would be tempted to play a more conventional striker against Ramos, such as Tammy Abraham or Olivier Giroud, Tuchel said: ‘If we play with no striker at all and Ramos has nothing to fight then that can also be a solution.’

“Werner would win any foot races against Ramos. He should go out there, help his team into a Champions League final and believe he can win them this competition.”