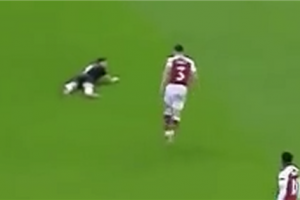 Kieran Tierney could be heard launching an expletive tirade towards an opponent during Arsenal’s 3-2 win over Benfica on Thursday night.

The Gunners came from behind to snatch a late victory over Jorge Jesus’ men in the Europa League last-32, with Pierre-Emerick Aubameyang head in an 87th-minute winner to send them into the round of 16.

After a 1-1 draw out in Italy last week, Aubameyang got the second leg off to the best start when he converted from close range to open the scoring after 21 minutes.

That was before goals from Diogo Goncalves and Rafa Silva turned the game in Benfica’s favour over the next 40 minutes.

However, Tierney then pulled one back for Mikel Arteta’s men six minutes later, and just as it seemed they were heading out of the competition on away goals Aubameyang headed home the all-important winner three minutes from time.

As Arsenal were searching for that late winner in Greece, BT Sport microphones picks up Tierney delivering a foul-mouthed message to Benfica star Darwin Nunez.

With just over six minutes to play the ball was cleared to Nunez, who went down under a challenge from the Gunners left-back as he tried to knock it past him and mount an attack.

The referee was not interested, nevertheless, deciding against awarding the Uruguayan a foul and instead pointing for an Arsenal throw-in.

The moment was captured by a Gunners fan on Reddit, who left his fellow supporters in stitches.

While another commented: “It's even funnier because the Benfica guy probably hasn't got a clue what Tierney has just said.”

After edging past Benfica in the previous round, Arsenal have been paired with Olympiakos in the last-16 of the competition.

Arteta’s men were dumped out of the Europa League by the Greek club last season, meaning they will have an opportunity to gain revenge this time out.