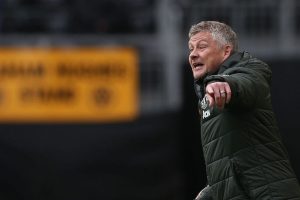 Manchester United completed a full season unbeaten away from home with a final day Premier League win over Wolves.

Wolves welcomed 10,000 fans back for Nuno Espirito Santo's final fixture in charge but it was United who had the last laugh.

And the Red Devils held on to end their Premier League campaign on a high.

Ole Gunnar Solskjaer's men ended the league season without a defeat away from home, a feat only ever achieved by Arsenal and Preston North End in England's top flight.

Solskjaer has continued United's proudest tradition by blooding 15 academy youngsters and Elanga could be the latest breakthrough star.

The Swedish teenager made his senior debut at home to Leicester but failed to provide a decisive moment.

But he was given the nod again and made his mark with a brilliant diving header to give United the lead after a stunning Daniel James cross.

It was a moment the youngster will never forget after a bright start that deserved a goal.

Fellow teenager Amad was also superb in a new central role that gave another exciting glimpse of the future.

The Norwegian boss was never going to risk his stars for the Villarreal game and the likes of Bruno Fernandes and Edinson Cavani will now be raring to go in Gdansk.

But it was an opportunity for the fringe players to shine and Juan Mata netted a key penalty on what may have been his last United appearance.

The penalty came after a controversial overturned VAR decision as Donny van de Beek was adjudged to have been fouled by Romain Saïss.

And it was dispatched in typically cool style by the Spaniard who once again showed his class.

United's home form has been faulty but Solskjaer has made United invincible on the road.

Undoubtedly, the task has been made far easier by a lack of fans in stadiums which have made home fortresses a distant memory.

But home supporters created a tasty atmosphere in the West Midlands and Solskjaer's young side rode the storm.

The Norwegian has instilled a fight in his side that makes them extremely difficult to beat away from home.