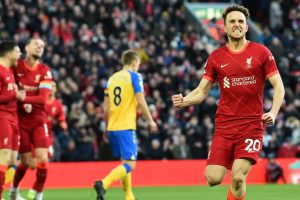 Liverpool showed why they are real challengers for the Premier League title by easing to a 4-0 win over Southampton on Saturday afternoon.

Jurgen Klopp’s side made light work of Saints as Diogo Jota scored twice to send them in 3-0 up at the break.

The Portuguese forward finished crosses from Andy Robertson and Mohamed Salah to make it 2-0 before Thiago benefited from a huge deflection off Lyanaco to make it 3-0.

Virgil van Dijk volleyed in from a corner after the break to add gloss to the score line, which did not flatter them.

Here are the three things Klopp got right on a perfect afternoon for the Reds at Anfield.

Roberto Firmino is out with a thigh injury, but the biggest compliment you can pay Jota is that he hasn’t been missed.

Firmino’s are big boots to fill at Anfield, where he is worshipped for his selfless work off the ball.

Liverpool’s recruitment department deserve lots of credit for identifying Jota last summer as a player who had the ability to slot right into Klopp’s system.

He is the perfect man to provide back-up to Firmino, Salah and Sadio Mane and is particularly adept at playing the Brazilian’s role.

His movement caused Southampton’s re-jigged back three all sorts of problems and he was on hand to finish his early chances and essentially make the game safe after just 32 minutes.

Firmino is expected back in mid-December, but he may well find it difficult to win back his place in Klopp’s starting XI.

Klopp has rotated his midfield three with regularity this season, due to the bulging fixture list and injuries.

While the front three and back four pretty much pick themselves, the midfield is an area which is constantly being shuffled.

It is therefore hard to know whether Klopp will stick with the trio he started against Southampton, but they were outstanding.

Fabinho is absolutely crucial to how Liverpool play and his presence made Jordan Henderson and Thiago all the better.

Thiago made it two goals in a week with his deflected effort – and while it was nowhere near as easy on the eye as his daisy-cutter against Atletico Madrid, it was well deserved.

The former Barcelona and Bayern Munich man has been hindered by injuries since arriving last summer, but it seems he is finally finding his feet now.

With the score at 4-0 after 59 minutes, Klopp had the luxury of replacing Thiago with Alex Oxlade-Chamberlain, emphasising the options at his disposal.

Liverpool’s full-backs are unlike any other side’s: they are their playmakers.

Robertson and Trent Alexander-Arnold were at it once again against Saints, whose switch from Ralph Hasenhuttl’s usual 4-2-2-2 formation to back five did them no favours.

Robertson terrorised the right side of the visitors’ defence early on and was instrumental in the opening goal, getting to the byline to cross for Jota to finish.

The Scot could have had another assist too, had Mane managed to stay onside from a beautifully flighted free-kick, or Jota not skied his hat-trick chance in the second half.

Alexander-Arnold was quieter in open play but once again showed his dead-ball prowess, whipping in the corner which Van Dijk smashed in.