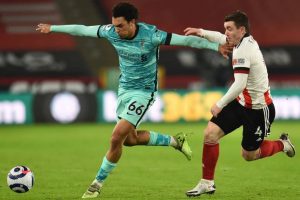 Liverpool secured their first win in five Premier League outings as they piled on the misery for Sheffield United.

The champions, who are focused on trying to secure a place in the top four in the Premier League this season, travelled to the Steel City with a squad ravished by injuries and other issues.

Adrian was given a rare start due to Alisson Becker's compassionate leave, and Ozan Kabak played in a centre-back pairing with Nat Phillips due to Jordan Henderson and Fabinho's injuries.

The Reds were forced to wait until the second half for the breakthrough despite having chances in the opening period, with Curtis Jones drilling home from inside the box after a neat Trent Alexander-Arnold cutback.

Roberto Firmino doubled Liverpool's lead after the hour mark thanks to a stroke of luck, as his shot took a deflection and soared over Aaron Ramsdale's head – though the strike was later ruled as an own-goal.

Andy Robertson has undoubtedly been one of Liverpool's star performers this season despite the team having a poor campaign by their lofty standards.

Due to the injuries suffered by virtually all of his centre-backs, Klopp hasn't been able to let Robertson roam too far forward due to the gap he leaves behind him.

But against Sheffield United, Klopp appeared to throw caution to the wind by giving Robertson the freedom to bomb forward and get involved in the attack, partly due to Kabak playing as a left-sided centre-back.

The Scotsman had a fine game, and looked strong going forward as he essentially played as another winger, allowing Sadio Mane to move inside and attack.

Copying one of Pep's tactics

Klopp appears to have been watching Manchester City recently, as his instructions to Alexander-Arnold bore a resemblance to the way Pep Guardiola has been utilising Joao Cancelo recently.

The Liverpool right-back, who has been largely ineffective this season, but on Sunday Klopp seemed to ask him to play more centrally than he has before.

Alexander-Arnold has often been talked about as someone who can play in the middle of midfield at some point due to his impressing passing range and ability.

And on Sunday, he played in a similar role to Cancelo, coming inside to offer another centre-back option and another central midfield figure.

His inside movements also freed up space on the right flank for Mohamed Salah to drift wide and punish Blades left-back Enda Stevens.

Keeping the faith with Firmino

Firmino has struggled for confidence recently and has been poor in front of goal, but ended his six-game dry spell with a stroke of luck against Sheffield United.

The Brazilian was struggling and spurned two golden opportunities in the first-half.

It would have been easy for Klopp to sacrifice him for Divock Origi, which would have further diminished Firmino's confidence.

But instead, the Reds boss kept the faith with his striker and was rewarded on the hour mark as he scored his seventh goal of the season.