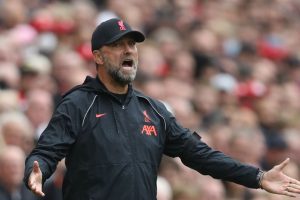 Liverpool made it two wins from two to start the season with a comprehensive 2-0 win over Burnley at Anfield.

Diogo Jota glanced the hosts into an early lead before Sadio Mane clinically wrapped up the points in the second half.

The Reds have made a strong start to the season as they bid to reclaim their Premier League crown after a disappointing season last year.

Jurgen Klopp's side were also out for revenge after Burnley ended their historic 68-game unbeaten run in the corresponding fixture last term.

Here, Daily Star Sport looks at what the Kop boss got right at Anfield on Saturday.

Klopp kept his faith in Diogo Jota leading the line again for Liverpool – and the Portuguese ace repaid him with another goal.

His deft glancing header to open the scoring at Anfield was his second goal in as many games after he netted in the 3-0 win at Norwich last weekend.

Roberto Firmino struggled for goals last year and has always looked the most replaceable of the Reds' deadly attacking trio.

Jota was on the verge of dislodging the Brazilian striker before getting injured last season.

But the Portuguese star has made the most of a longer pre-season than Firmino and has hit the ground running this term.

Firmino scored against the Canaries too, but it looks a long way back for the Brazilian – Jota should now be the main man going forward for Liverpool.

Should Diogo Jota now be ahead of Roberto Firmino in the Reds pecking order? Let us know in the comments section

Harvey Elliott was handed his first Premier League start for the Reds against Burnley.

The youngster dazzled at Ewood Park last season, coping admirably with the rough and tumble of the Championship.

Fielding Elliott against Burnley – one of the Premier League's more physical sides and similar to the teams he would have come up against last year – was a shrewd move from Klopp.

The 18-year-old didn't look out of place either, starring in the supporting cast behind the Reds front three.

The midfield maestro linked up well with goal-machine Mohamed Salah and even teed him up for a disallowed goal after the Egyptian had strayed offside.

Elliott's performance certainly vindicated Klopp's call to include him – and showed that he could be ready to step up and help fill the void left by Gini Wijnaldum ahead of schedule.

Kostas Tsimikas deputised again for Andrew Robertson despite the Scottish ace being fit enough for the bench.

Despite Robertson's return, Tsimikas was given the nod again to fill in at left-back and the Greek international put in another assured display.

Tsimikas teed up Jota to open the scoring in the first half with a Robertson-esque delivery from the left flank.

With Robertson now back to fitness, it's inevitable that Tsimikas will find himself back on the bench.

But he's shown he's a more than capable deputy for the flying Scotsman going forward this season with his displays over the past couple of weeks.