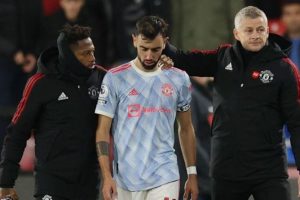 United have suffered humiliating defeats in three of their last four games, losing to Liverpool 5-0 and 2-0 to Manchester City in a very routine fashion.

Speaking on Sky Sports after the defeat to the Hornets, Liverpool hero Jamie Carragher hung the United side out to dry in an extraordinary rant.

“Those players and the performances are an absolute disgrace,” said the former England international, “It’s one of the highest-paid squads in the world and I’ve watched a lot of Watford and they’re awful, to lose there (Vicarage Road) 4-1 is disgusting and disgraceful.

“The manager will go we know that but the players’ performances this season have been scandalous.”

A new interim manager is expected to be appointed for the remainder of the season, and they could get the wheels in motion for a replacement next summer by clearing out some of the club’s underperforming stars.

Despite having an attack capable of being one of the best in the world and a defence strong enough to win titles, United’s midfield is incredibly average.

On his day, Paul Pogba is a magnificent footballer and Donny van de Beek has shown glimpses of a quality player in his scarce opportunities, but yet Fred was consistently one of the first names on the team sheet under Solskjaer.

The Brazilian has been error-prone since his arrival at the Theatre of Dreams and has never looked like the player that United have needed in the heart of midfield.

With fans frustrated at how regularly the 28-year-old was playing, it would be a significant sale and a sign of intent if Fred is shown the door.

United may be forced to cut their losses on Anthony Martial in January after six underwhelming years in the Premier League.

The Frenchman was purchased from Monaco for £36million (potentially rising to £58m) as one of the most exciting talents in world football in 2019, but his development has somewhat stalled and he is bottom of the pecking order at Old Trafford now.

When given minutes, Martial is certainly popping up with a goal or two, but he is not of the level of Cristiano Ronaldo, Edinson Cavani, Marcus Rashford or Mason Greenwood.

If an interim manager has their own targets that they want to bring in then Martial could be a wise player to be cashed in on to fund the transfers.

As aforementioned, when in flying form, Pogba is one of the best midfielders in world football.

However, the Frenchman is out of contract at the end of the season and is yet to put pen to paper on the extension offer that has been on the table since last summer.

With such uncertainty over his future, which suggests the player isn’t overly happy at the club, it could be for the best that Pogba is sold.

The 28-year-old hasn’t enjoyed the greatest time at United but would still attract a healthy fee from one of the top European sides interested in him, notably Real Madrid.