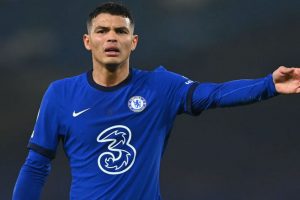 Thiago Silva has handed Chelsea a major boost by returning to training ahead of their clash with Liverpool.

Brazil star Silva, 36, has been out for a month with a thigh injury, missing his side’s last six matches.

But the former Paris St-Germain defender was back in full training on Tuesday and is pushing for a recall against the Reds.

Silva had been training alone but has now stepped up his rehab ahead of Thursday’s trip to Anfield.

A free agent signing in the summer, he has been a key performer under both Frank Lampard and Thomas Tuchel this season.

And the Blues are expected to activate an option in the one-year contract he signed in August to extend his stay at Stamford Bridge for another season.

Andreas Christensen has stepped in well in Silva’s absence and impressed in Sunday’s 0-0 draw with Manchester United.

But Silva is determined to win his place back as soon as possible and is set to give Tuchel a headache over when to put him back in the team.

Christensen said: “For me personally, I’m playing games back-to-back and I haven’t had that for a while so it’s great for me. We have to chase the top four together.

“We’re in good form so it’s about going into every game trying not to let that form drop and to keep winning.”

Callum Hudson-Odoi also trained as normal after suffering a minor injury to his left thigh against United.

And he is expected to be in contention to start against Liverpool – as Starsport told you earlier this week.

There were fears the England winger might be forced to miss the game after he was substituted against United.

He watched the second half on Sunday with an ice pack and heavy strapping around his left thigh after coming off at half time.

But the 20-year-old is in line to start against Liverpool after coming through training with no problems.