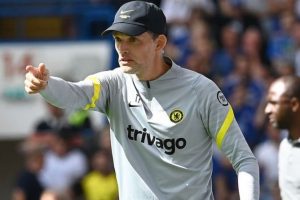 Chelsea boss Thomas Tuchel has been credited with saving the careers of two players who were “finished” at Stamford Bridge. Tuchel saw his side start the Premier League campaign with a 3-0 win over Crystal Palace on Saturday. The Blues are favourites with some for the title this season following the signing of Romelu Lukaku from Inter Milan.

Lukaku was not ready to play against Palace but is set to feature in the London derby at Arsenal this Sunday.

However, Tuchel’s side looked good enough without the Belgian as they cruised to victory over Palace.

Captain Cesar Azpilicueta started on the opposite side in what has become a familiar formation for Tuchel.

JUST IN: Nuno to ‘take advantage’ of Tottenham weapon that Mourinho failed to in transfer hint

Former Chelsea striker Tony Cascarino thought both Alonso and Azpilicueta were coming towards the end of their times at the club.

However, he says Tuchel has turned their careers around and made them important players at the club again.

“[Tuchel’s] a great fit for Chelsea,” Cascarino told talkSPORT. I think tactically you wouldn’t look any better than him in the Premier League.

“I think other managers have different qualities but he tactically is extraordinary.

“The way he maneuvers his team, he meddles with his team slightly, but clearly improves players.

“Alonso wasn’t seemingly wanted anymore at Chelsea. Ends up being a player for them and was offered as being part of the Lukaku deal, and they’ve kept him.

“I’ve seen him play so well for Chelsea and I thought he was finished at the football club.

“I thought Azpilicueta was finished at the football club and he played wing-back yesterday.

“Chelsea are a really good side.”

Following the win on Saturday, Tuchel provided an update on Lukaku and N’Golo Kante.

He hopes both players will be available at the Emirates this weekend.

“N’Golo felt discomfort in his ankle on Friday,” said Tuchel.

“He felt it in the warm-up to the Super Cup match against Villarreal and he already played a little bit in pain and overcame the pain in that game.

“But on Friday he felt it again and we decided to take him out and not to take any risk now at the beginning of the season. I think N’Golo will be back in the middle of the week to hopefully be ready for Arsenal.

“We expect Romelu to finish quarantine in time to be able to join team training on Tuesday, because Monday is our day off.

“So we will try to prepare him to play against Arsenal and hopefully he can be on the pitch.”